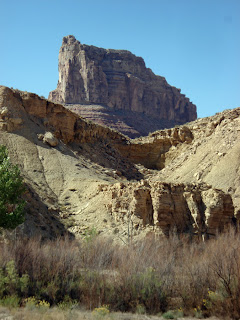 I can't get enough of the Utah desert. The quiet, the peace, the beauty... the desert satisfies my spiritual longing. The San Rafael is easy to access, and offers great camping, beautiful vistas, and some fun hiking. Last Spring, while hiking around the Mexican Mt. road, I spied what looked like a cool camping spot. So this weekend, Rodney and I spent a couple days in the desert at this wonderful spot, right on the bank of the San Rafael river. I call the area Lunizul Ruins, since a maker for the area is a stack of old timbers and an old well pipe, and, of course, Lunizul is the camping tequila of choice in these recession times. Here's some pics of the ruins and the camping spot (click on the pics for a larger image). 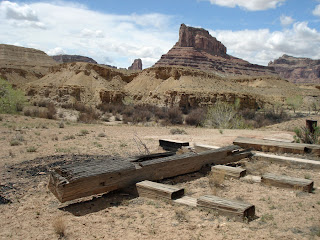 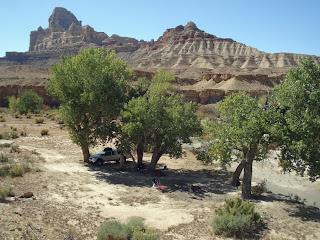 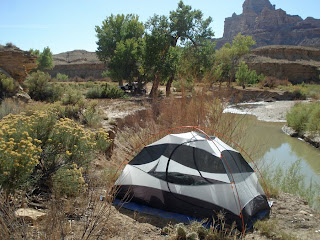 That's Rodney's tent. He pitched it under a neat outcropping at the end of the riverbank. 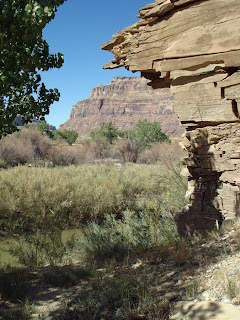 As I mentioned, we were camped right on the river, and area defined by arching cottonwoods (leaves just beginning to change with the Fall weather). The trees, and up and down the river. 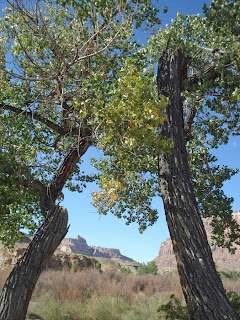 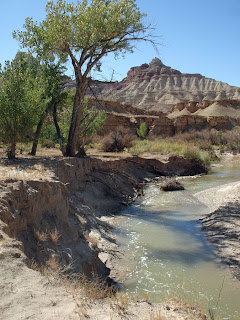 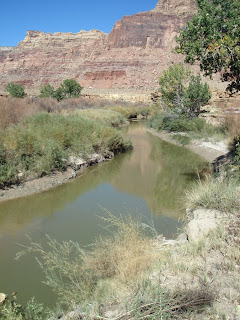 Another icon of the camping spot was this old tree trunk monolith. 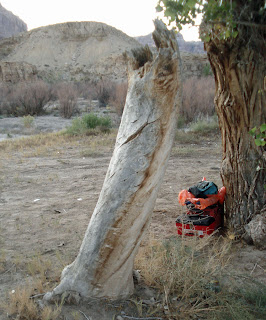 After supper, we had enough light for a short hike around the area, resulting in this nice shot of the San Rafael river. 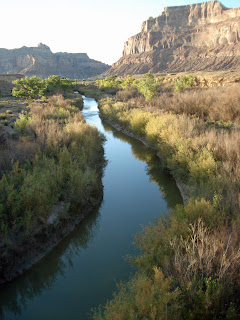 As the last light of the sunset dimmed, I turned around to catch the full moon peeking around a butte. Pretty spectacular (actually, the moon was a couple days short of full, but still bathed the desert in light until morning). 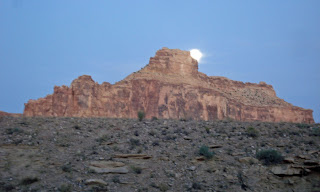 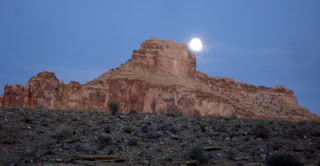 Earlier, Rodney spent some time reviving a neat fire pit, then we went out on a wood gathering expedition, resulting in a cool camp fire. An ace photographer, Rod took this shot of me, the old sage of the campfire. 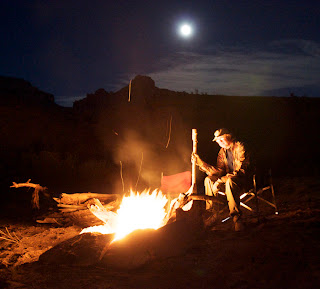 The next morning, we loaded up on carbs, my famous sleazy huevos rancheros, and headed out to the Black Box trail. The San Rafael river is weird, creating geological perspective dissonance. For a couple miles beyond the San Rafael campground and bridge, the river is right next to the campgrounds that line the river. Fourteen miles down the road at Mexican Mt., the river is again right next to hikers and campers. However, in between, the river cuts a very deep canyon, perhaps as much as 1000 feet deep, called the Black Box. A couple years ago, we hiked into the Black Box around the middle of the canyon. This year, we decided to take the second trail, nearer the head of the canyon. Here's Rod at the trailhead. 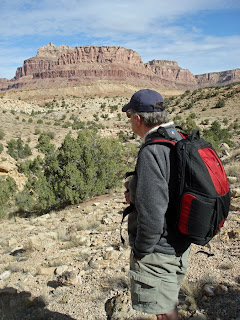 The trail follows a stream wash for about a quarter mile. Then we noticed a cairn and trail off to the left. Which way to go? Thankfully we chose the trail. As we climbed above the wash, we saw the need for a trail. Another quarter mile the wash turned into a deep side canyon with a major dropoff. First the dropoff, then a shot of the side canyon toward the Black Box. 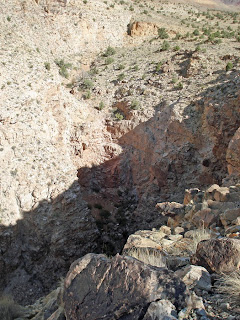 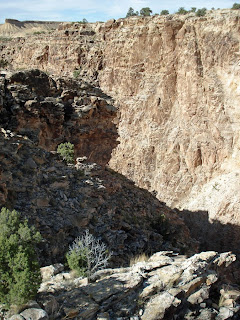 As we progressed along the trail, I decided to take a break and use my intense mental powers on a small boulder... right in half, like a hot knife through butter... 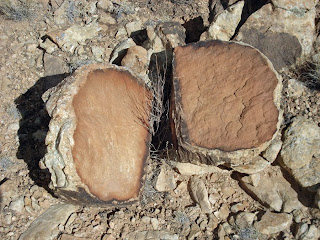 Soon we reached on overlook where the side canyon met the San Rafael river, a confluence considered the head of the Black Box. 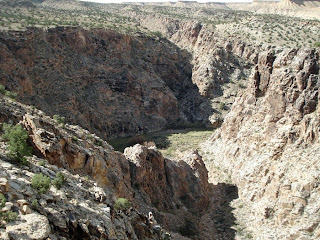 A short hike further and we could see the full Black Box area of the San Rafael. First a shot down river, where it flows around Mexican Mt., through more canyons to the Green River, and eventually to the Colorado. 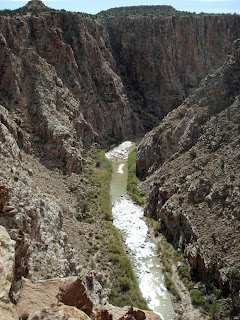 And now a shot up river, west towards the San Rafael campground, the Wedge, and eventually the headwaters in the Manti mountains. 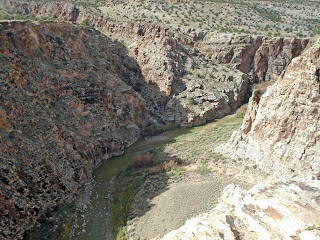 Right below our vantage point were some neat rapids. So I leaned way over the cliff's edge to get this shot (yeah, right, thankfully I have long arms...). 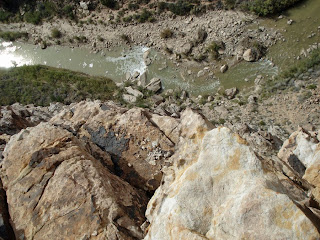 And a neat rock spire sticking out of the cliff wall. 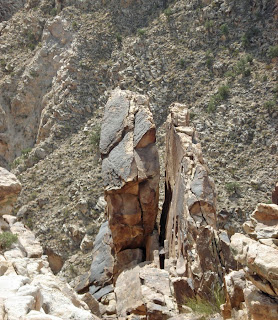 Finally, from the cliff over the river, we got a great panoramic view of the San Rafael desert. Here's three shots. 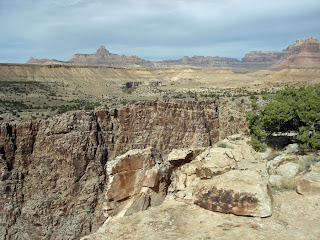 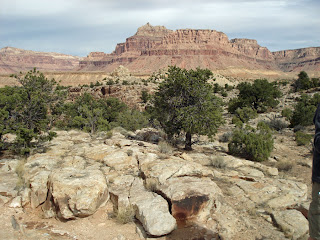 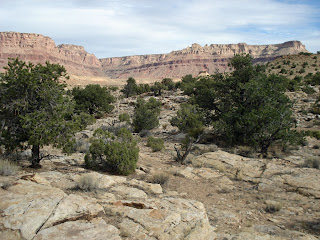 Another satisfying trip. We found a couple other roads down to the river we want to take in the future, so next Fall I suspect we will take a followup trip to the San Rafael.
Posted by Rev. Willis at 1:11:00 PM
Email ThisBlogThis!Share to TwitterShare to FacebookShare to Pinterest

A wonderful job Baron. Lots of photos and great commentary.