Steamer's is a relatively famous jazz club in Fullerton, CA. Mostly mainstream jazz, but that's cool, especially when the fabulous guitarist Willis Clow is playing there. I saw him last week as part of Buck's Vibe, a great combo headed by drummer Peter Buck (and fellow-to-Willis USC grad). 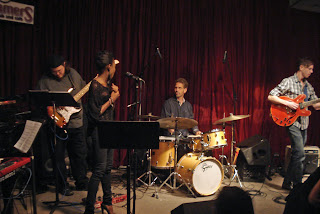 Peter has quite the following, so the club was packed on a Tuesday night. Buck's Vibe features mostly original compositions by Peter, which often turn into a cool funk groove as the soloing progresses. Here's a couple shots of Willis. 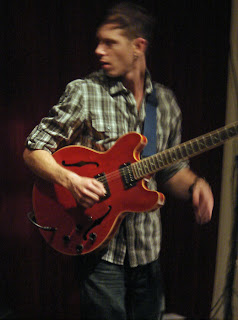 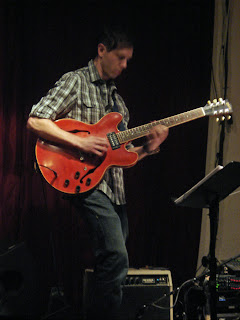 Good to hear Willis playing jazz again, although these days, musical styles are harder to distinguish, so someone with a varied musical background is at an advantage as the groove explores beyond a particular genre.

Peter Buck also plays behind noted jazz chanteuse Barbara Morrison (she has appeared at the SLC International Jazz Fest a couple times). Barbara provided vocals on one tune this night. 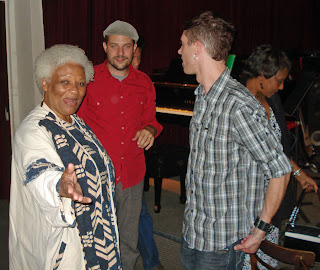 After the show she says to me: "he (Willis) can sure read his ass off..." then went onto discuss Willis in context of her European tour guitarists John McLaughlin, Buddy Guy, and Carlos Santana...

A fine night of music. I hope to hear this combo again, Peter Buck is the most adventurous drummer since Matt Wilson, and the combo is solid. Check out his CD.
Posted by Rev. Willis at 1:28:00 PM
Email ThisBlogThis!Share to TwitterShare to FacebookShare to Pinterest