I'm drinking in this bar, empty except for an old guy down at the end, putting 'em a way pretty hard. A John Lee Hooker tune comes on the juke box, and this guy blurts out "I used to play that". Another round for both of us, and it started... Seems he and his buds were autoworkers in the Hamtramck plants during the fifties. They formed a small, proto-electric band and played in local bars on the weekends.

The Detroit area in those days was of course a hot bed of blues, with Hooker, Dr. Ross, and many others leading the way, so other groups often played in this "Detroit" style. Anyway, this guy in the bar claimed they also made a record, on the famous Vee-Jay label (Hooker's label at the time). Didn't sell much, didn't make them famous, but they didn't care. A steady job on the assembly line and decent pay kept them in a secure lifestyle, at least until the GM reorg screwed their pensions.

Suddenly, the guy gets up off his bar stool and heads for the door. I hear him mumble something about catching a bus to visit his grand kids in Oakland.

I did some searching online, checking out small Chicago and Detroit record stores. Eventually i found this: 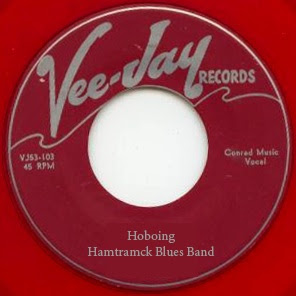 They did a great job, hear it here...
Posted by Rev. Willis at 2:58:00 PM
Email ThisBlogThis!Share to TwitterShare to FacebookShare to Pinterest

Rev. Willis is the best...sounds like the Rough and Ready Blues Band...fab.