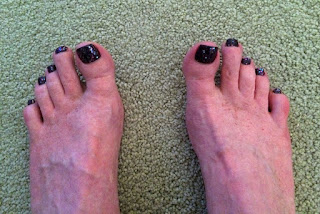 Posted by Sherm Clow at 5:19 PM No comments:
Email ThisBlogThis!Share to TwitterShare to FacebookShare to Pinterest

Flying Over the Mohave

Had a window seat this last flight to OC...  My god what a huge jet engine!  And a nice contrast to the starkness of the Mohave Desert.  Somehow its bleakness holds a fascination with me...  is this some sort of environmental existentialism?  Anyway, I hope to explore more of this area, on the ground, especially since Prez Obama has created (3) new national monuments in the area.  And more info here... 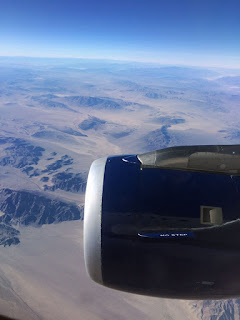 Recently a friend and I travelled to OC in his new car on its maiden voyage.  How would this new Subaru Crosstrek handle freeway speeds?  How good it the gas mileage?  How about comfort?  And, maybe, how does it handle a backroad?

The reason for the OC trip was NAMM.  But we usually take the long way home, exploring new parts of the Southwest.  This trip we decided to check out some places in Arizona.  I-10  to Blythe, then across the state line and cut up to Prescott.  From there, a mountain pass on the way to Sedona. 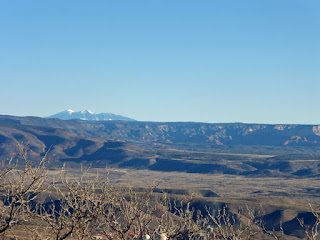 Above is a shot capturing the San Francisco Peaks (above Flagstaff).  Sedona lies somewhere out there.

Just short of Sedona, we took a side trip into Red Rocks State Park.  Below, a couple pics from the park: 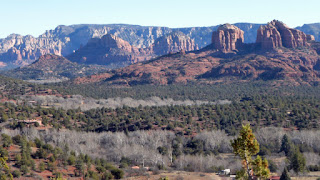 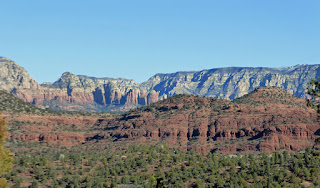 In Sedona, we managed to avoid the palm readings, the Atlantean healing, and the Karma Cafe, amongst other new age treats, but we did stop for lunch at the Coffe Pot for 101 omelettes, and one of these cool coffee cups (upside down as presented at our table). 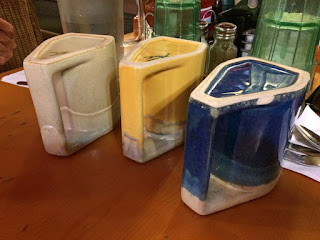 After lunch, we drove up Oak Creek Canyon, quite pretty, which led us to Flagstaff.  Filling up with gas and snacks, we took off up 89 hoping to make Page.  Just outside of page was a neat overlook.  One can see the cut of the Colorado River as it begins the Grand Canyon. 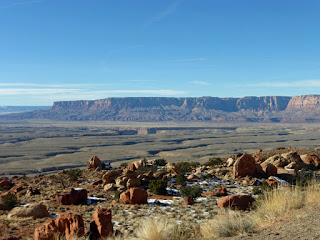 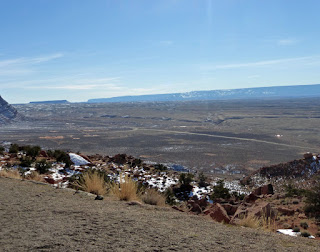 In Page, we found a nice and rather cheap motel (off season!).  I had a great view of the Glen Canyon Dam, and even a bit of Lake Powell.  The Vermillion Cliffs are in the distance. 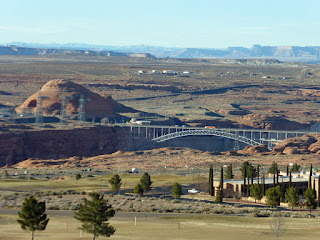 The next day, we continued on 89 towards Kanab.  Being Southern Utah, and not having any rain for a week, we thought we would try out the Cottonwood Wash Road from 89 up to Kodachrome Basin State Park, a distance of about 40 miles of back road.  Should be in good shape, right?  Southern Utah...  no rain...  Nope!  Immediately we could see significant rutting (no road grading until Spring).  But still, this was up through the new Grand Staircase Monument, so the road should be good...  Nope!  Soon we ran into patches of snow and ice.  Thankfully the temps were still in the 20's (Southern Utah?), so no mud.  And fascinating formations along the road (which followed the Pariah River to some degree). 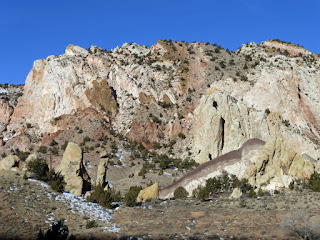 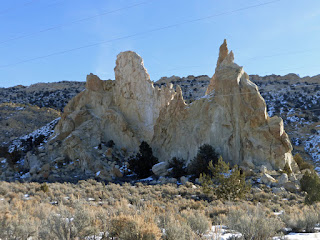 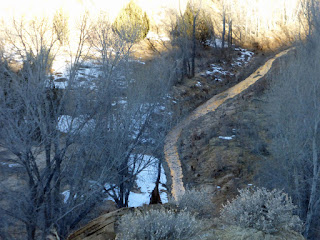 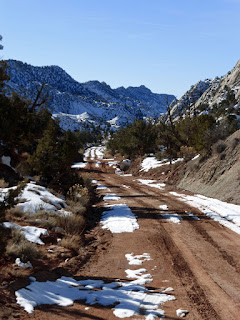 But the road was long, and I didn't realize we would ascend over 7000 feet!  Soon we were in a lot of snow, and temps were rising.  The last 10 miles or so were more muddy, with some slipping and sliding.  But Rodney hung in there, as did his new car, and finally we made pavement at Kodachrome Basin State Park. 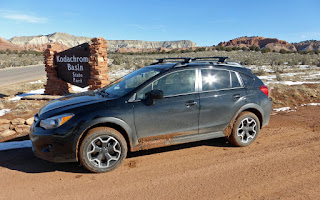 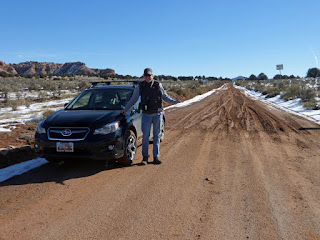 Unfortunately, the hiking trails in Kodachrome were closed (snow and mud), so we were hell bent for Panguitch and lunch at a local diner.  Then the long drive back home.  All in all, a great road trip and a perfect shake down cruise for the new vehicle.


Posted by Sherm Clow at 9:14 AM No comments:
Email ThisBlogThis!Share to TwitterShare to FacebookShare to Pinterest
Newer Posts Older Posts Home
Subscribe to: Posts (Atom)