I lost two old friends this summer, both to car crashes. I've posted previous about Wayne Christiansen, the great jazz pianist. Click on the link to revisit that post. I recorded the music played at his tribute, and now offer a couple tunes from that night. The musicians on the tunes include Herschel Bullen on soprano sax, Dan Waldis on keyboards, Mike Miller on guitar, Steve Allred on pedal steel, Harold Carr on bass, and Kenny Brienholdt on drums.

---------------------------------------------------
More recently, I learned that Tom Gardner died in a car crash. He and I go way back, both graduating together in Anthro, both hanging at the old Camelot swilling beers, sampling herb, and discussing Marvin Harris long into the night. Techno-economic/environmental determinism! Changed my life... really... We followed that up with a year of the Revolutionary Printing Collective, during the turbulent anti-Viet Nam War days.

Tom moved on, getting a graduate degree in landscape architecture, working with his father's firm down in Cedar City, and eventually building a sheep business out of Paragonah. He was famous for his solar heated sheep pens. He married Ellen who became a doc in Cedar City. We were always welcome to their historic home, whether they were home or not. Always beers in the fridge. And then there was the infamous New Year's Eve party... Blast the Gates of '78! How did anyone survive? 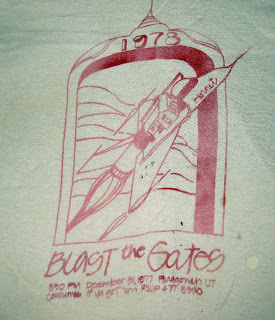 I last saw him about 5 years ago. He was up to SLC to find help for a very sick dog. He dropped into the 11th Ave house, walked over to the fridge, grabbed a beer, and we caught up a bit. Then he was off... his life took him to an additional ranch in Nevada, and my life went into a new relationship.

Several road trips down I-15 brought me past Paragonah, I kept thinking I should drop in, but never took the time... I sure feel bad about that decision now. He was a great guy, he will be missed... 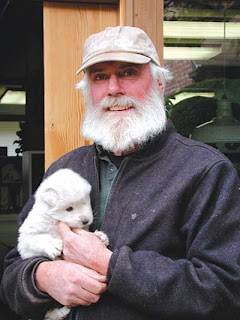 Home grown tomatoes... God's gift to humankind. A true wonder of the world. And damn good eatin'! I rarely buy a store tomato, just wait for late summer/early fall when the crop comes in. And, to celebrate the harvest, it's traditional to hold a BLT party! No better way to enjoy a fresh, garden tomato than in a BLT, especially with good bacon, extra sourdough bread, a slathering of mayo, romaine lettuce, and, hopefully, some of Jane's great pesto.

First, the garden. Farina hosted this year's party, and she was one of the few to have a good crop of tomatoes. She has a fabulous garden, all watched over by the cactus shark. 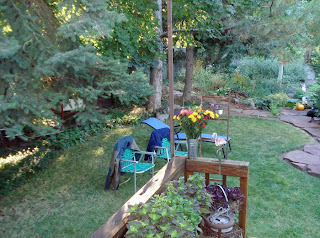 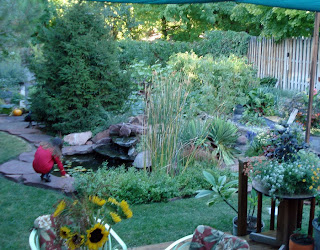 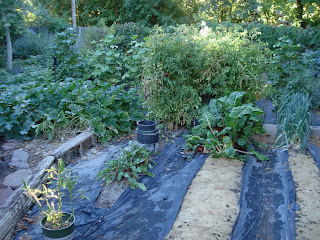 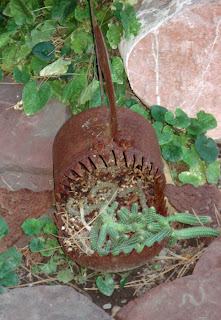 The tedious part of a BLT party is the bacon... takes a while to cook and is always messy. We had some enthusiastic cooks this year. 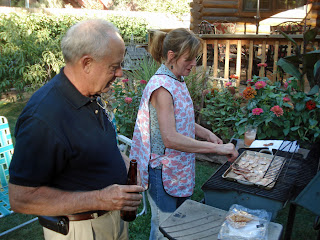 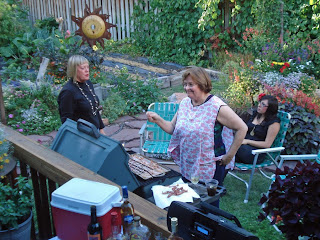 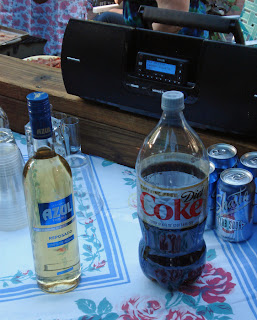 And a few other beverages... nice sheer, by the way! 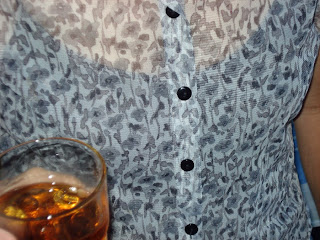 So we ate and drank and laughed... 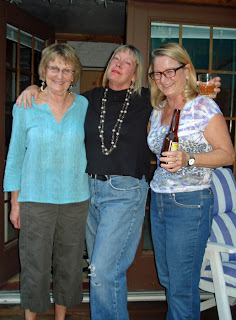 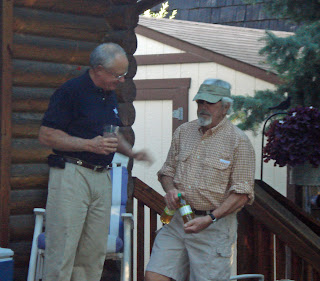 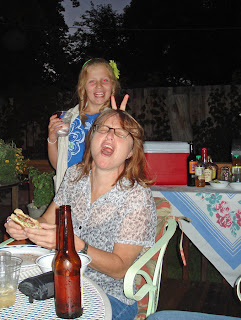 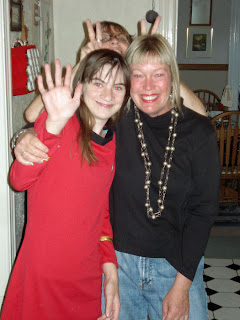 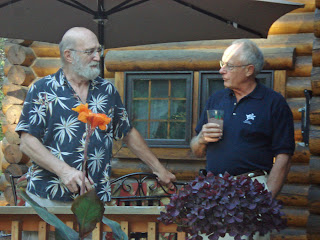 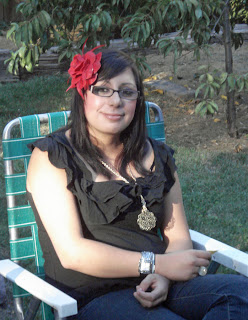 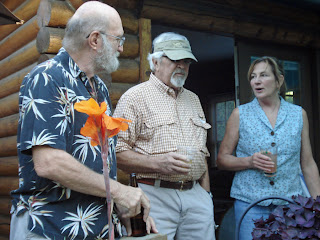 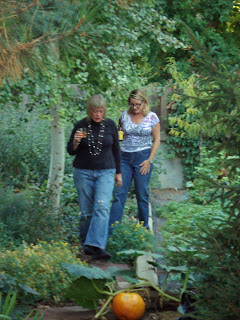 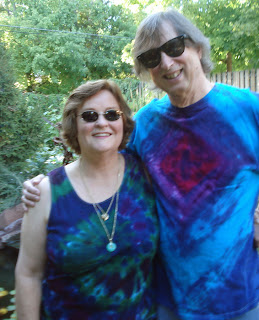 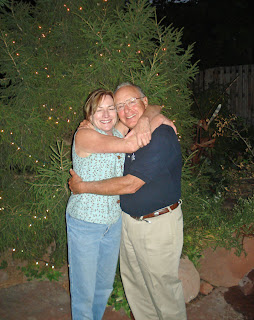 The weather continues to stay mild to hot... hopefully we will get another run of tomatoes... and more BLTs, and more beer, and more party, party, party!
Posted by Rev. Willis at 1:56 PM No comments:
Email ThisBlogThis!Share to TwitterShare to FacebookShare to Pinterest

...and is reborn with many new members. For more than 7 years, the Salt Lake Alternative Jazz Orchestra has played advanced big band jazz in this area. Amazing, holding together a 14 piece group that long. I guess having a large pool of excellent jazz musicians available has made it possible. Most original members have moved on (a few have returned). Recently, the founder, Dave Chisholm, left for grad school, and several other significant members left the band. But last weekend, for the finale of the Hidden Hollow series, SLAJO was once again at full force, with a host of young jazz blood. 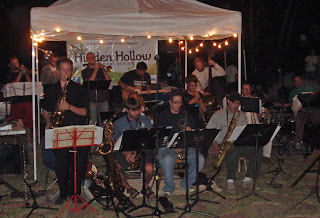 Joe Chisholm on trombone anchors that section and has been the principle organizer/leader of the band for the past few years. Moanin' Marco Blackmore is back and keeping the sax section cookin'. Will Lovell remains as always (mostly) on bass. From there, nearly everyone else is new. So new, I didn't get all the names. They play well, have good chops, but the newer guys are still somewhat timid in their soloing. I'm sure we will hear great things from them. New gigs were announced, so hopefully the band will continue well into the future. Check out the band on their web page... and download the tunes from the HH performance.
Posted by Rev. Willis at 12:30 PM No comments:
Email ThisBlogThis!Share to TwitterShare to FacebookShare to Pinterest 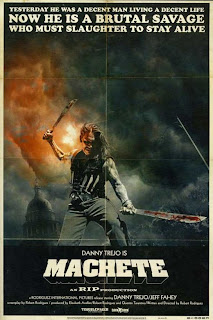 Went to see Machete this weekend... I love the films of Robert Rodriguez, as absurd and over the top as they may be (Once Upon a Time in Mexico is one of my all time favorites). He works in the grindhouse genre, as does it well... well, the gore part is certainly prolific, anyway (about a dozen beheadings in the first 3 minutes). I enjoy the tongue in cheek, the in jokes, the music (Rodriguez and his band do much of it), the special effects (again, mostly by Rodriguez). He's a complete and very good film maker if you can handle the genre. Like his bud Tarentino, grindhouse and references from past movies is their forte.

And what's DeNiro doing in this movie? Along with Steven Segal, Cheech Marin, and other notables... oh, Don Johnson as the evil vigilante!, Rodriguez gets all kinds of top line actors involved in his movies...and looks like a great cinematic time was had by all.

Speaking of DeNiro, what a great role. The Tea Party folks should hire him. Playing a politician, his anti immigration speeches are dead spot on, if that's your point of view. Segal, looking pudgy at this point in his career, actually delivers his best performance in some time. I've never liked his films, but he pulls off the bad guy role perfectly. And Cheech, gotta love him... this time as the padre consoling his bro... "I absolve you of all your sins, now get the fuck out of here!" Then there's Lindsy Lohan... well, she's got a great bod, if nothing else. Hell, the image of her in a nun's habit plugging DeNiro will stay in my mind for a long time. 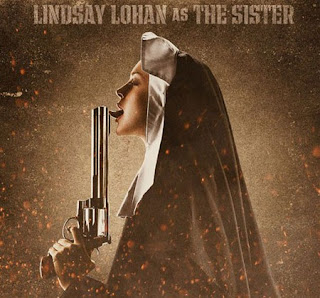 And, lots of sex... naked bodies everywhere... and the resurrection of Michelle Rodriguez as She (Che) at the end sent my testosterone levels through the stratosphere!

Finally, Danny Trejo, Rodriguez' big, ugly Mexican heavy in other films, gets the lead role. Not much delicate dialog to deliver, but his style is perfect... "Machete don't text..." "Why do I want to be a normal person when I'm already a myth?"... Simple, great lines. 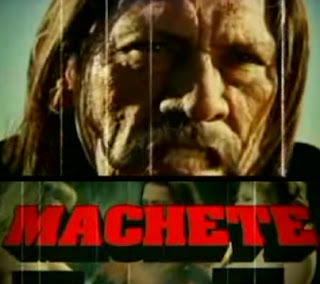 In an era of endless blow 'em up action movies, mostly crap, Rodriguez stands apart as a master of the art... exploiting pretense, rather than falling victim to it. But, warning, grindhouse is not for the faint of heart.
Posted by Rev. Willis at 11:58 AM No comments:
Email ThisBlogThis!Share to TwitterShare to FacebookShare to Pinterest
Newer Posts Older Posts Home
Subscribe to: Posts (Atom)