I mentioned in my last post that I recorded Japan's Surf Coasters at the Double Down Saloon in Las Vegas during the group's mini tour in August.  The recording can be heard or downloaded in various formats at Archive.Org.

Posted by Sherm Clow at 2:03 PM No comments:
Email ThisBlogThis!Share to TwitterShare to FacebookShare to Pinterest

The second part of my epic road trip involved my secret passion for surf music!  The Surf Coasters from Japan were celebrating 20 years as a group with a brief US tour...  first Las Vegas, then Orange County.  Since I had recorded their previous two gigs at the infamous Double Down in Vegas, I just had to recorded this latest event. 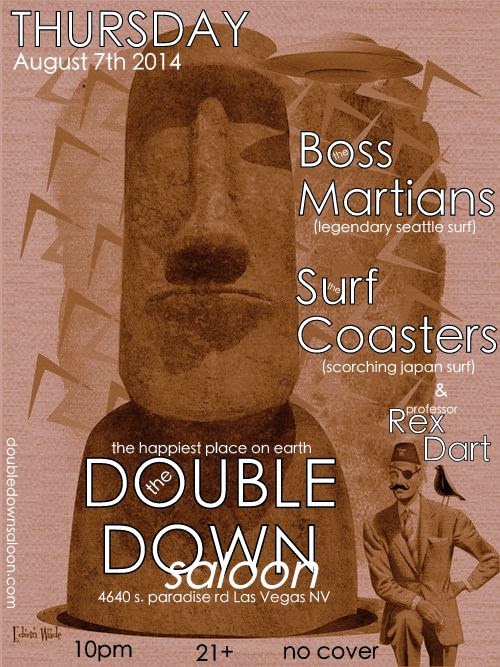 An added treat was the appearance of the Boss Martians, newly reformed.  And what an evening!  The crowd went wild! 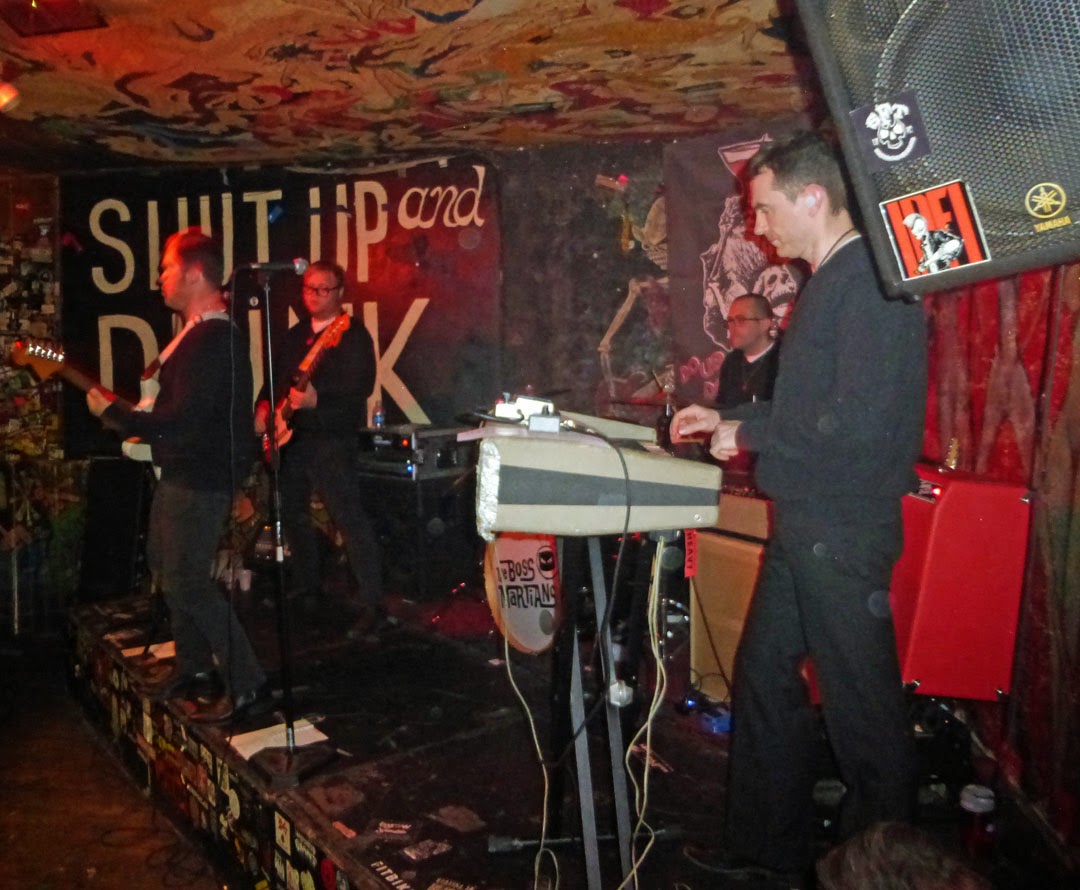 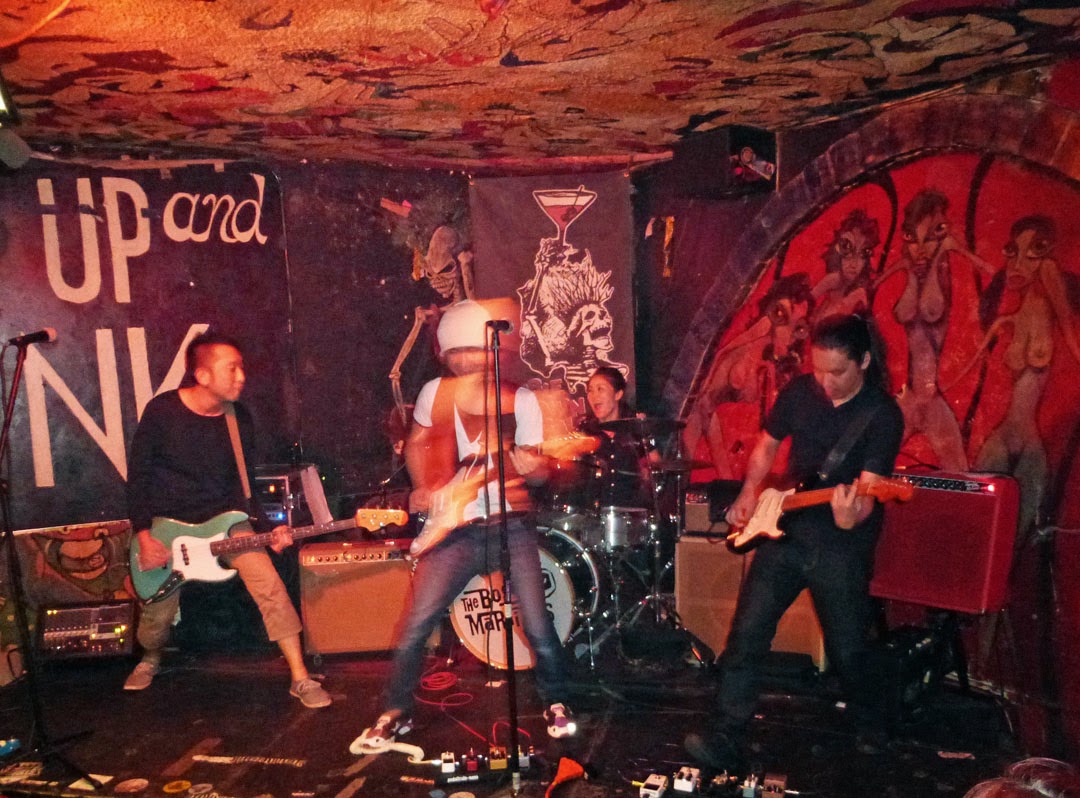 The next day it was off to Orange County for the Surf Guitar 101 convention, and another reunion with surf music fans from all over the world, some I've known for 20 years or more. 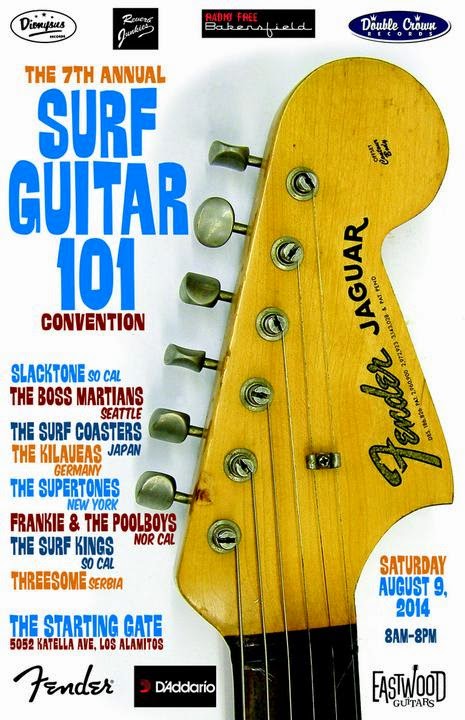 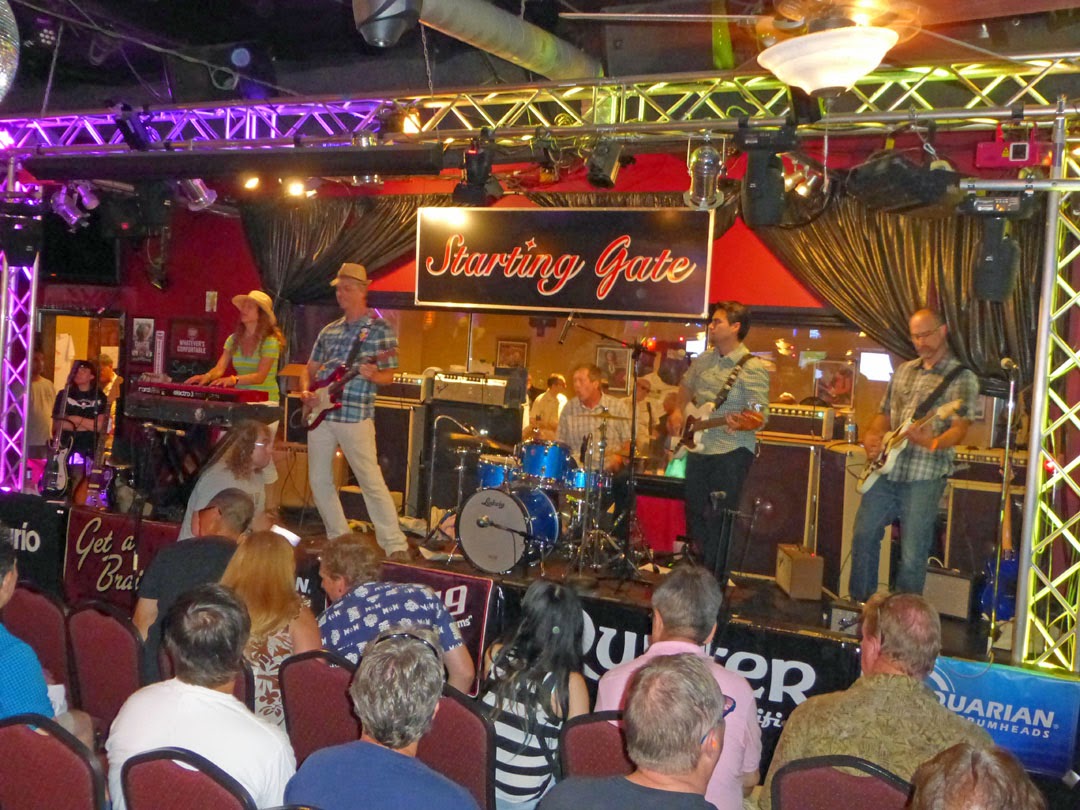 12 hours of surf music!  I left with my brain reverberating (literally!) and hopped on a fresh horse (I drove the wheels off the Cadillac, again literally, and had to trade in the rental) for the trip back home.  Two weeks on the road, many adventures, many friends, a good time.

Posted by Sherm Clow at 10:58 AM No comments:
Email ThisBlogThis!Share to TwitterShare to FacebookShare to Pinterest

Road Trip--The West is the Best

I've previously blogged a bit about my return trip from Illinois, through Nebraska via two lane highways.  Quite an adventure, hampered only by some anxiety about how much distance I could cover (plenty as it turns out) and lodging in small towns (mixed).

But once I got into Colorado, and closed in on the Rockies, things changed.  The sky was bluer (lack of humidity?) , the air purer... my spirits soared...  at least until the drenching thunderstorms attacked me in the middle of serious road construction!

I enjoy the mountains, but I'm a bit of a desert rat, and since I wasn't headed directly home, I got to cross the San Rafael Reef. 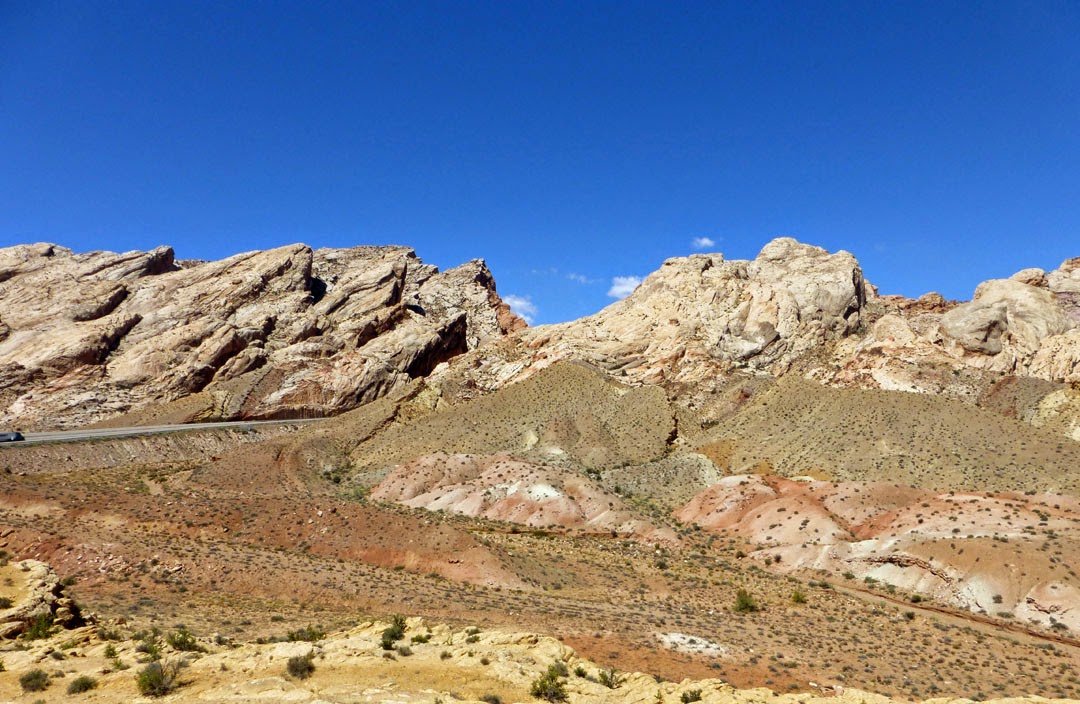 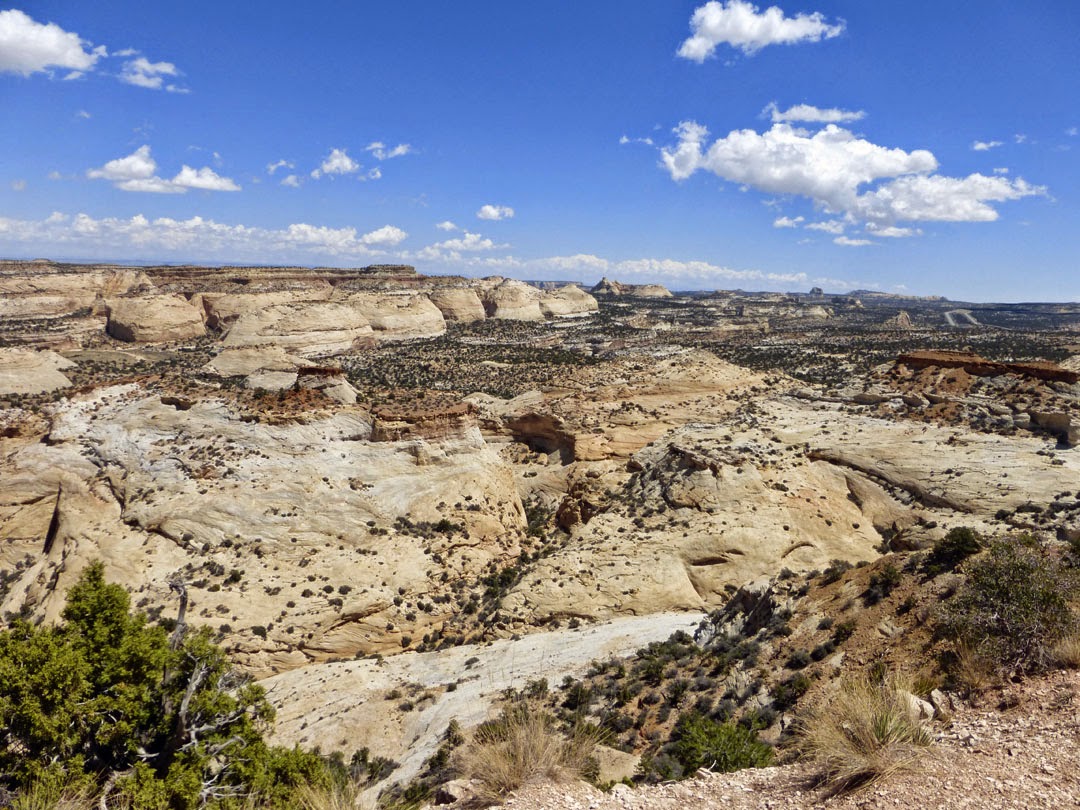 The most amazing stretch of Interstate in the country!

And headed for Vegas, I had time for a side trip into the Kolob area of Zion National Park (thank you lifetime Golden Eagle Pass). 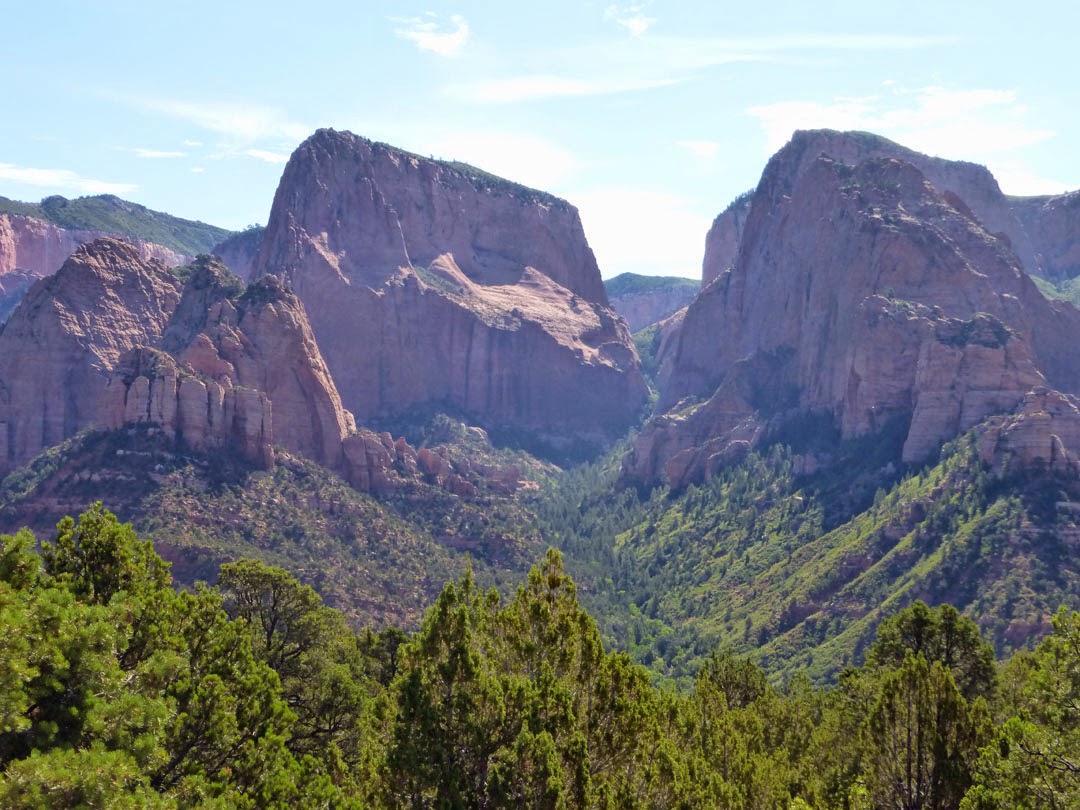 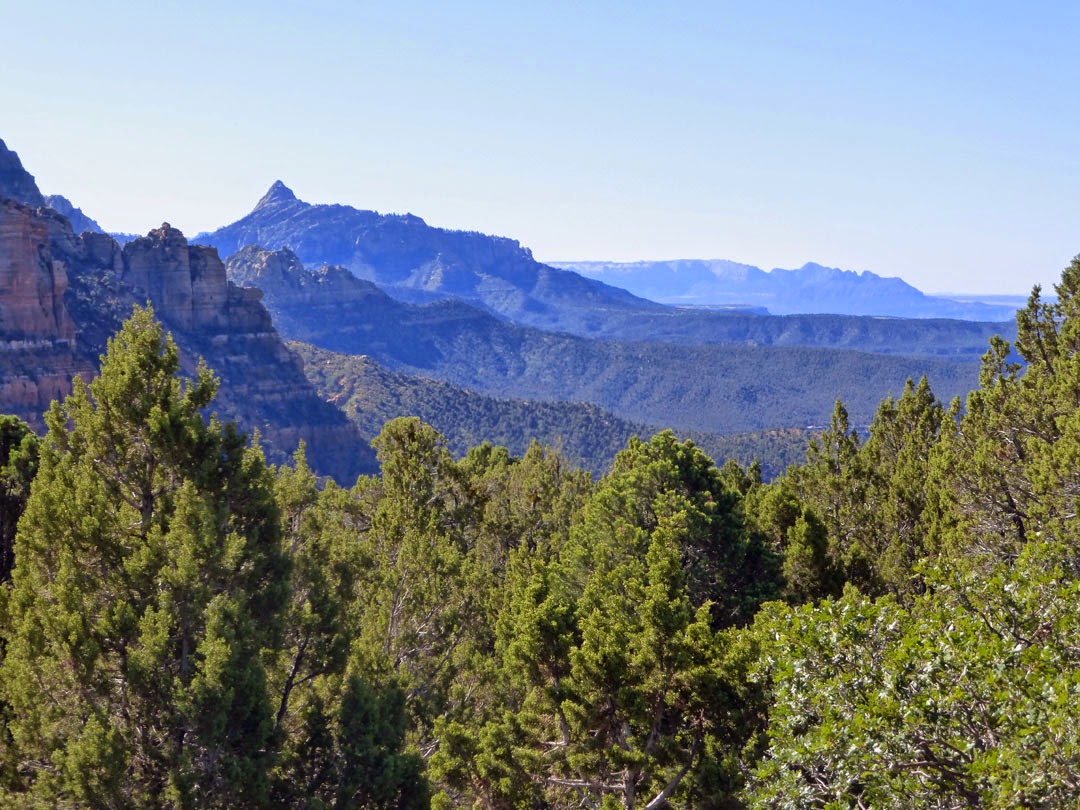 Posted by Sherm Clow at 10:21 AM No comments:
Email ThisBlogThis!Share to TwitterShare to FacebookShare to Pinterest 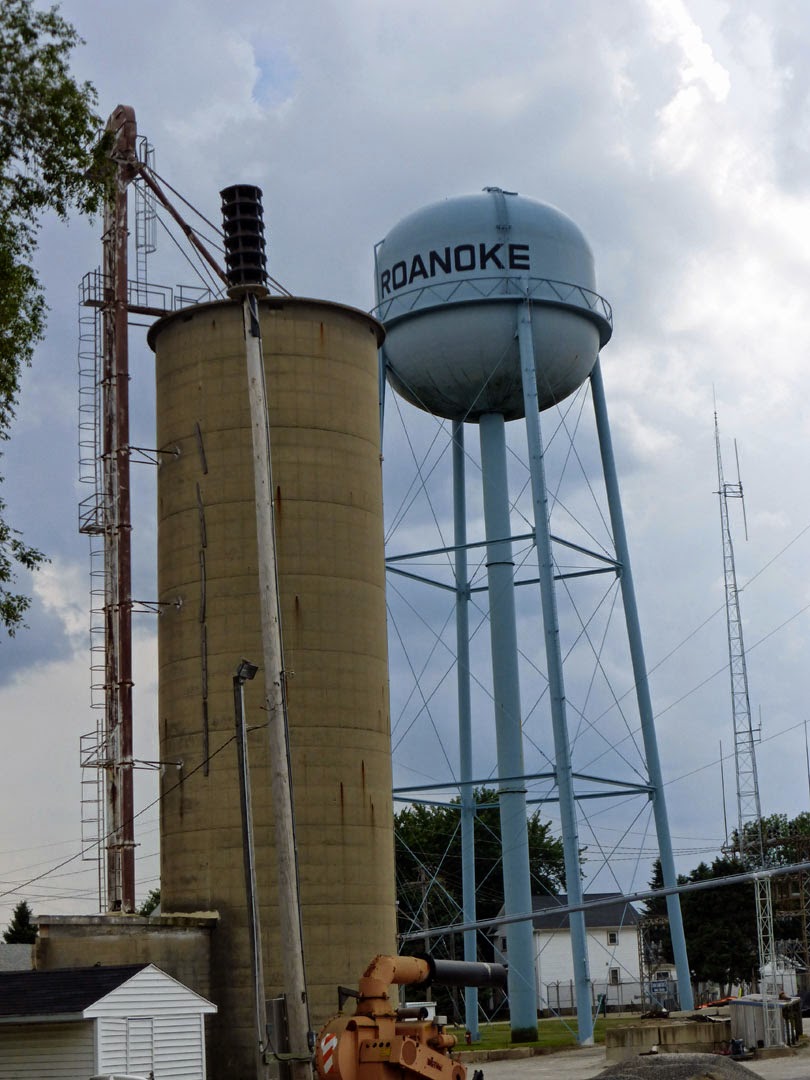 Well, a long delay finishing my road trip adventure.  In today's edition, we cover Roanoke, Illinois where I grew up.  It's been 10 years since I visited, and I was pleasantly surprised that things looked good, not as depressed as the town seemed in the past.  New subdivisions, a swimming pool in the park, new grain elevators, and corn, corn, corn.  The most intense corn crop I've ever seen...  so thick that driving country roads was an adventure, crossroads had no visibility for other traffic. 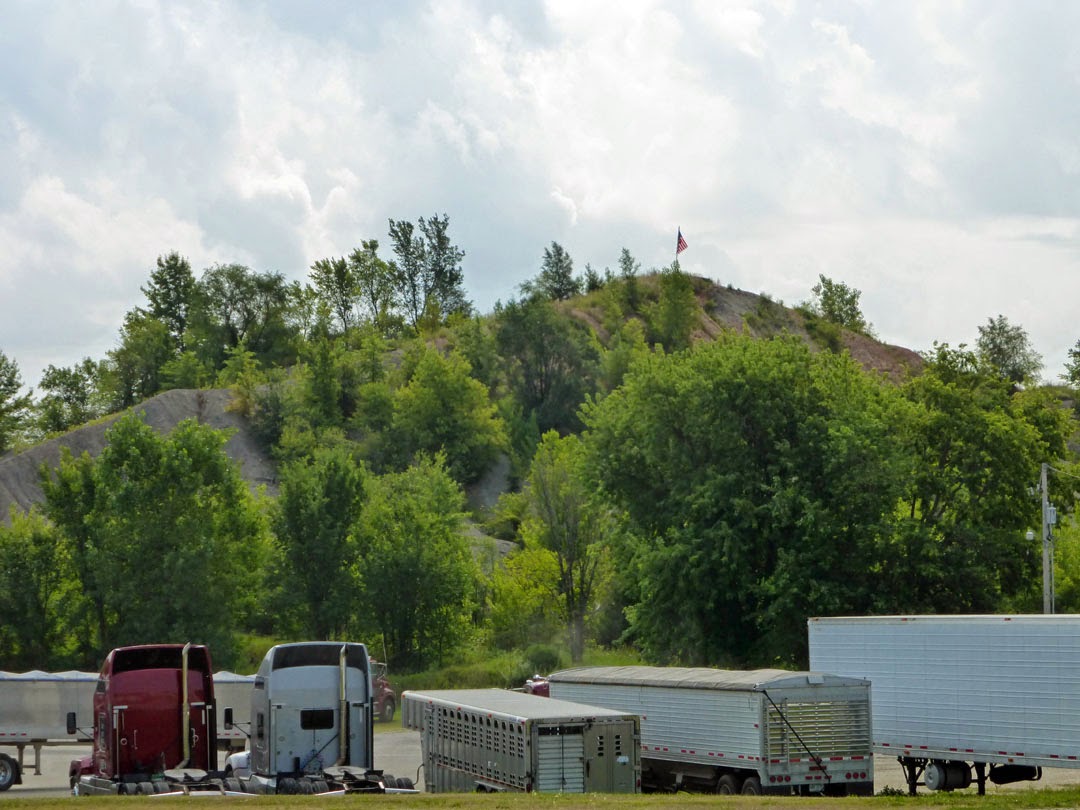 Mt. Jumbo, the old town landmark, really isn't much of a mount these days, especially since I moved West into the Rockies.  Jumbo is really a slag heap from the old coal days, long gone before I was born.  The American Legion used to blast fireworks off the top, then roll an old car ablaze off the side!  What a 4th of July thrill!

Below Mt. Jumbo is the ball park, not very well developed, but the scene of many afternoons of baseball.  And nice to see a new tribute to the old coal industry. 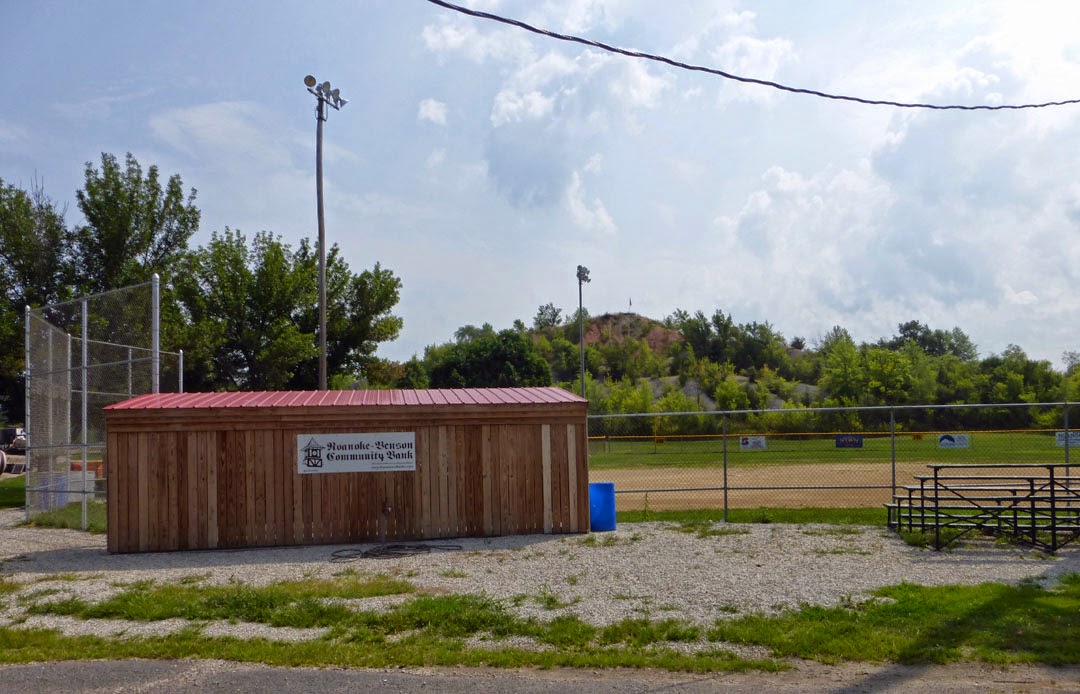 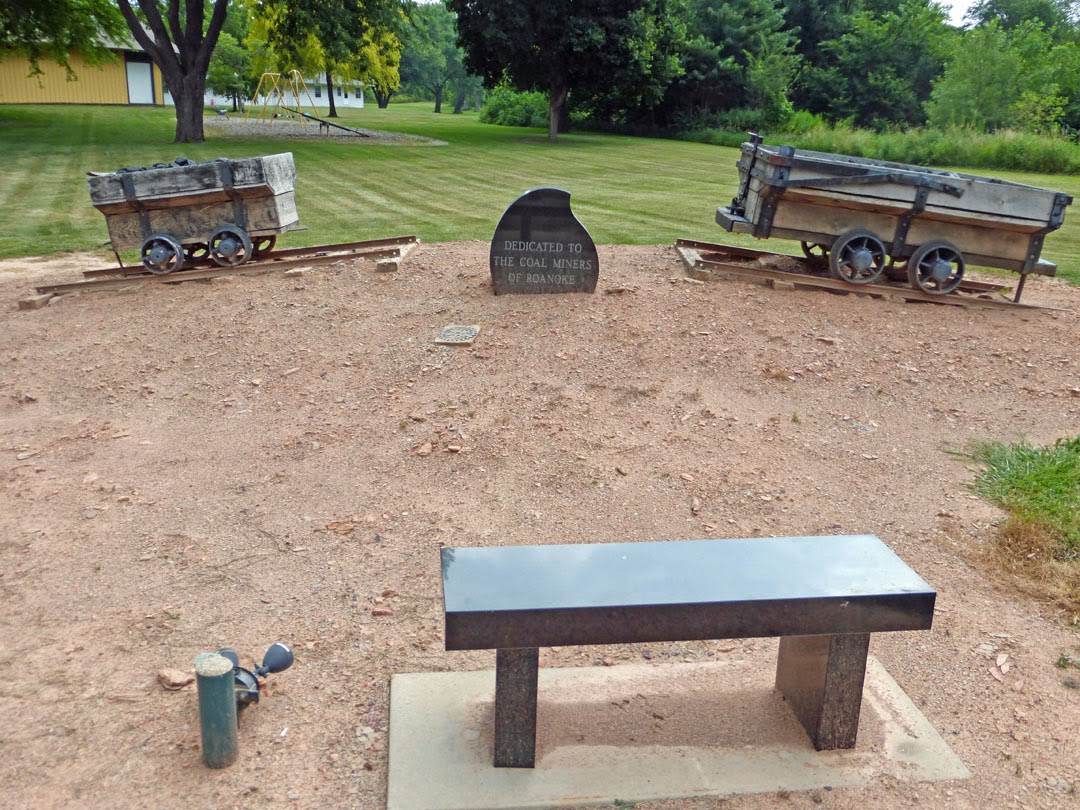 And here's those new grain elevators.  We are definitely in midwest farm country now... 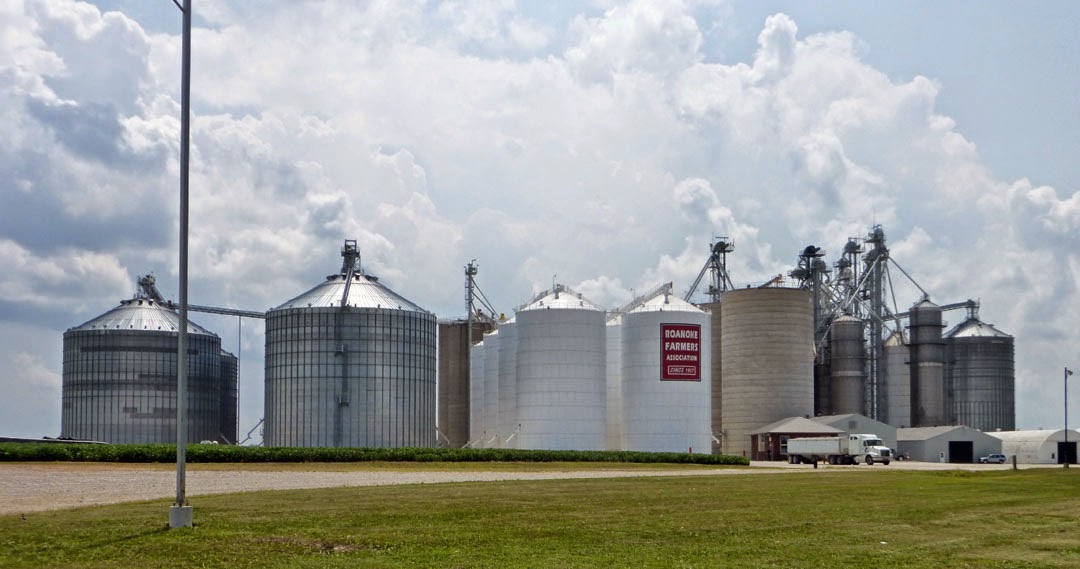 Went past the high school since it was my 50th class reunion...  Nice new rocket, but the old school building is coming down at last, making way for a new facility.  Sorta sad... 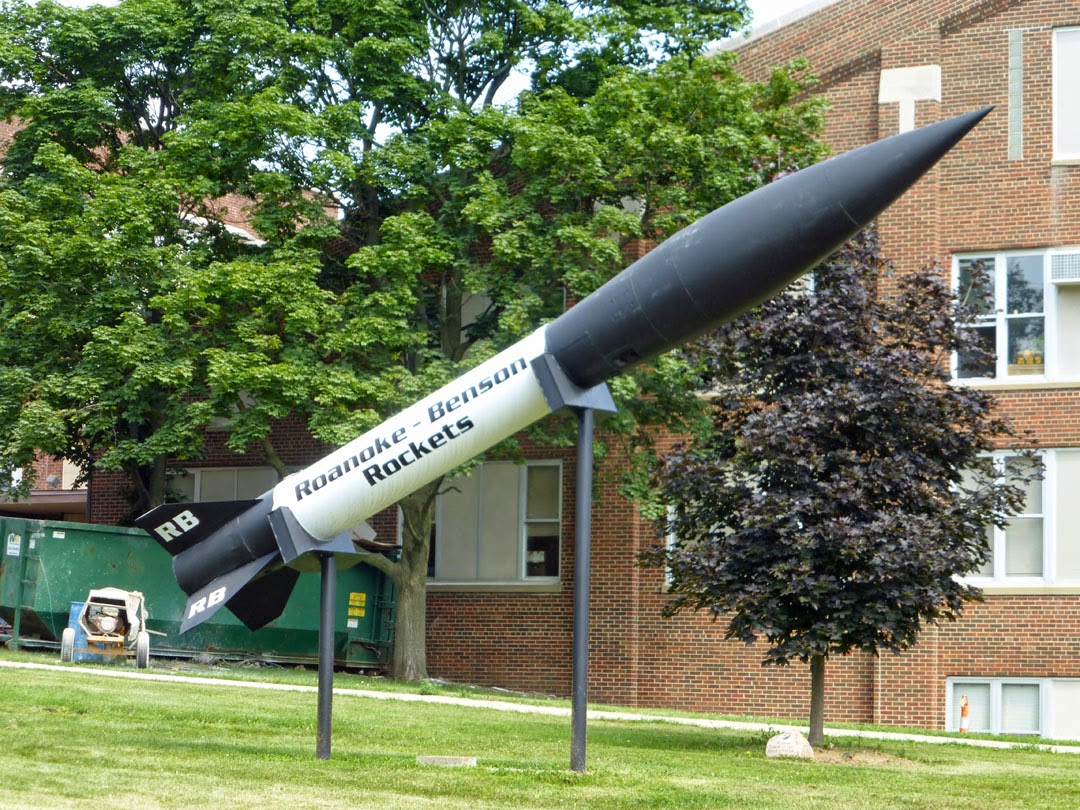 I also drove past my old house...  it's been redone so many times I didn't recognize it.  Well, it has been 50 years! 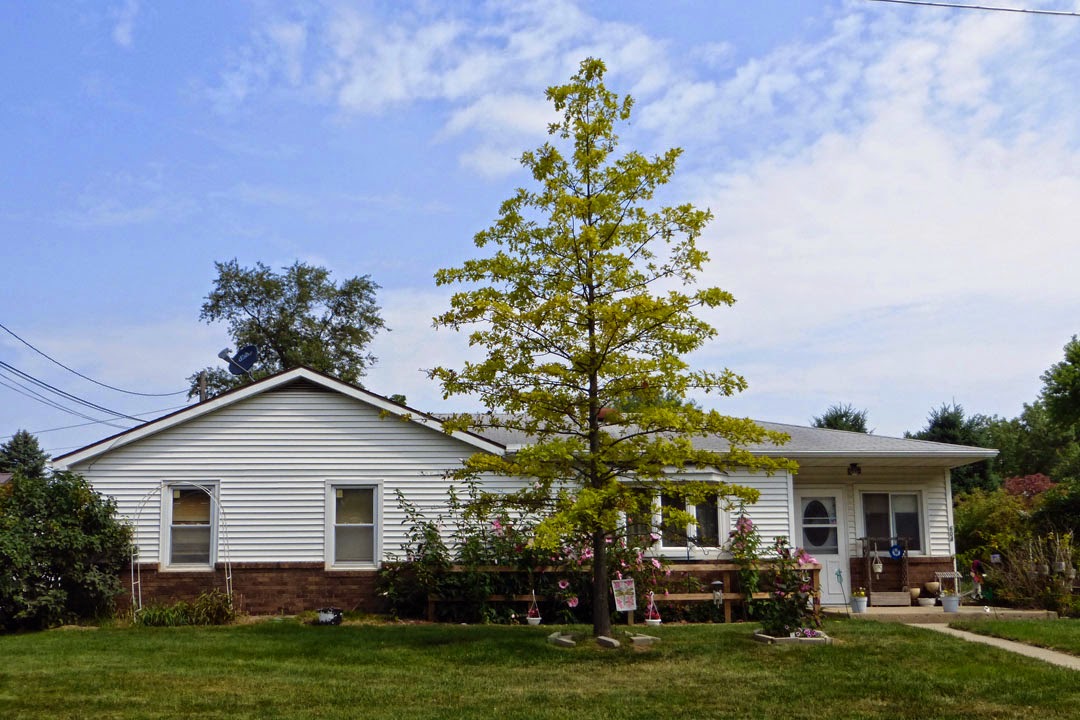 This trip was a multiple reunion.  I found a favorite cousin who I'd lost contact with...  he's moved back to the family farm and is still quite active at 92.  I also had lunch with another cousin couple who have the most amazing farm...  a combine bigger than my house,  Turkey coops extending seemingly into the horizon, and of course, corn.  I guess I just have some of this farm boy stuff in my genes somewhere, I thoroughly enjoyed my time surrounded by corn.

Then the class reunion, great to see so many show up.  Older, hopefully wiser, retired or close to it, but mostly alive! 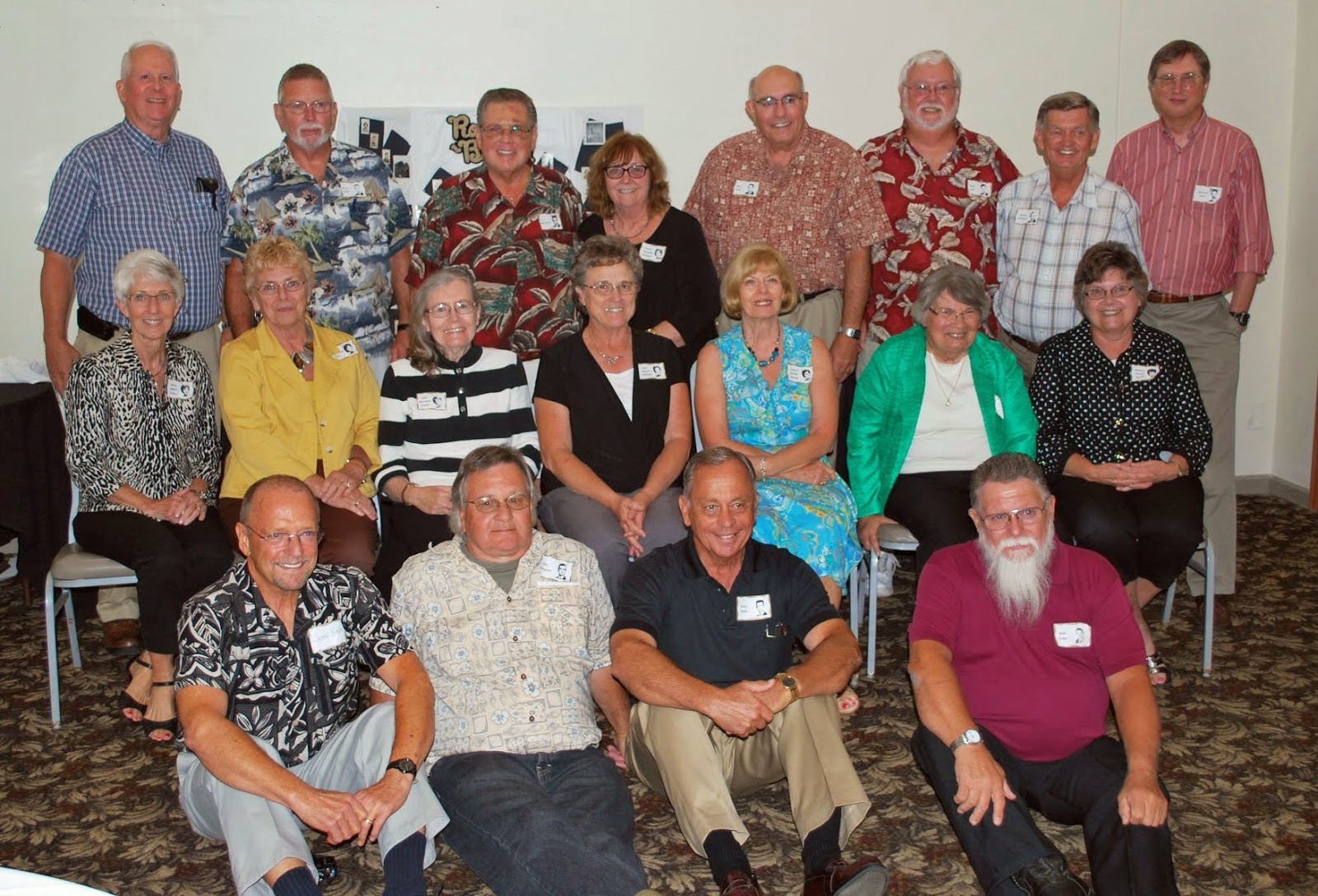 I had one other bit of business back in Roanoke.  Finally, a gravestone for my mother.  Her ashes are buried in the old church graveyard out in the country, along with my uncles and aunts and grandparents.  Very peaceful and moving. 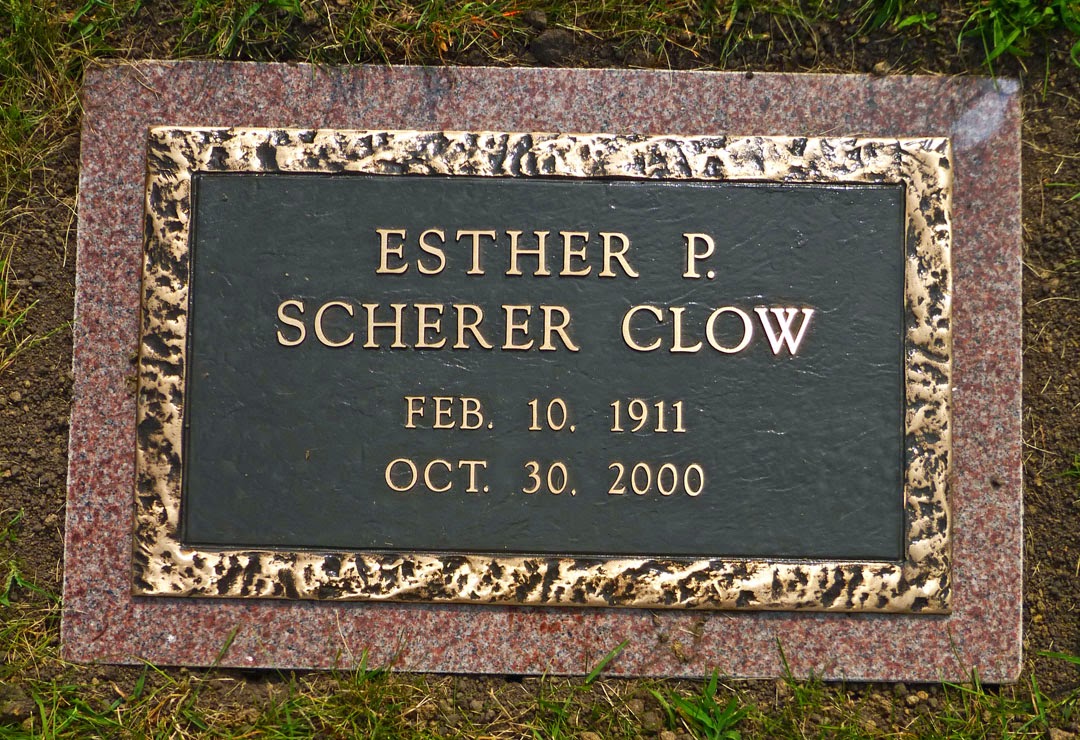 Posted by Sherm Clow at 9:09 AM No comments:
Email ThisBlogThis!Share to TwitterShare to FacebookShare to Pinterest
Newer Posts Older Posts Home
Subscribe to: Posts (Atom)