BY JOYCE KILMER
I think that I shall never see
A poem lovely as a tree.

(from a walk in Irvine) 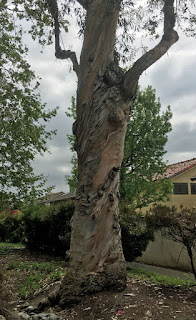 Posted by Sherm Clow at 10:48 AM No comments:
Email ThisBlogThis!Share to TwitterShare to FacebookShare to Pinterest

Over the weekend I was invited to a house party which featured a couple sets by Los Rifamos, a rare instro group in this city.  The band has actually been around a few years, with only occasional appearances (and my lack of awareness...  gotta get out more).  I discovered the group from their application to the Utah Arts Festival, a pleasant surprise after listening to about 8 million mediocre rock bands.

Los Rifamos play an instro style more laid back than the current near-punk intensity of today's surf music.  Well, with a lead guitarist using a Burns guitar, one can expect a sound closer to the Shadows and the Atlantics than Slacktone or the Surf Coasters.  (The group did do an opening set of garage band vocals of the louder, faster variety).  Here's to Hank Marvin!

Most tunes were originals, had a great deal of melodic content, and were quite enjoyable.  My only complaint might be the need to mix in a few more uptempo tunes in a live environment for today's instant gratification generation.

Here is a link to an iPhone movie I did of one song from their performance.

I enjoyed talking to the band members, sharing knowledge of musicans, music, and gear we had in common.  And the homebrew English ale was excellent!  Thanks to Grant and his friends for the great party.