Made it to NAMM once again. This major music convention, across from Disneyland, is really Dizzyland, madness beyond belief! Miles of musical instruments, music creation software, and studio gear... way more than I can describe or photo. So it didn't take long to get back to basics... sex! 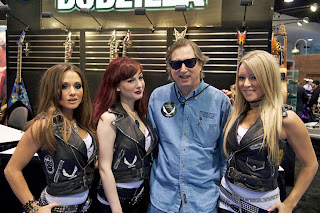 The booth babes are always a fun thrill! As I said to the guys, let's get the sex over first, then we will be relaxed for the rest of the day.

The one piece of gear that was particularly interesting was from Taylor. Long known for their great acoustic instruments, they now produce several lines of electric guitars. Pictured is an interesting slim line hollow body electric with a Bixby, called a T3. 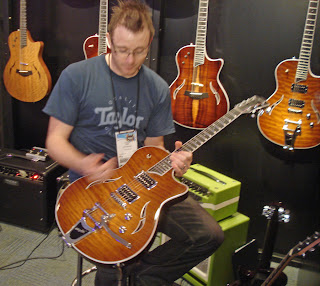 I must admit, the most impressive layout is from Fender... all their current lines (Charvel, Squire, Eddy Van Halen, Gretch) are nicely presented in a huge room with a wonderful "street" theme. While checking out Gretch gear, a real guitar hero showed up... Duane Eddy! responsible for activating my twang gene back when I was a young farm boy in Illinois. 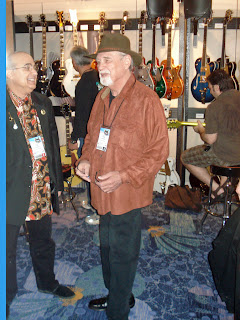 Eddy was scheduled to play at one of the after hours events, which we declined because we were hammered after fighting the madness all day (interestingly, the punks "dress up" for the NAMM event... a formal engagement for that group of folks... makes for some interesting people watching).

Also in the Gretch area was a small stage... one performance we caught was from Paul Pigat, a Canadian rockabilly star... a great player! 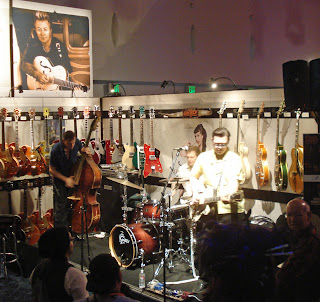 As well as high styling punks, the metal gods were present. Interesting display for gear oriented to that genre... 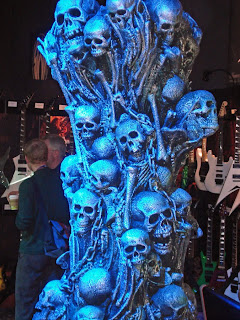 Well, I guess that's an awful sketchy report from NAMM. But the event is soooooo overwhelming! Thankfully we can always come back for sex (the Gretch Girl, signing posters for herself and the gear)... 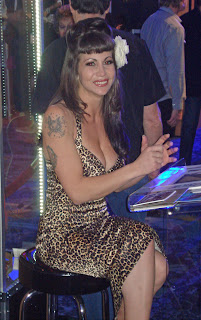 I'm breathless...
Posted by Rev. Willis at 12:22 PM
Email ThisBlogThis!Share to TwitterShare to FacebookShare to Pinterest

Nice dispatch and this fill someone in on helped me alot in my college assignement. Gratefulness you for your information.

Amiable fill someone in on and this post helped me alot in my college assignement. Say thank you you as your information.

I'm in a love/hate relationship with digital memory because of how prices are always dropping. I absolutely hate buying Micro SD Cards for my R4 / R4i at (what seems to be) a crazy bargain price only to see it become a whole lot cheaper a couple of weeks later.

I share a love/hate relationship with virtual memory because of the way prices are always dropping. I hate buying SDs for my R4 / R4i at (what seems to be) a cheap price only to see it become a whole lot cheaper a few weeks later.

Good dispatch and this fill someone in on helped me alot in my college assignement. Thanks you seeking your information.

For long time I use this freeware: [url=http://www.freeflvtomp3converter.com]FLV to MP3 free converter[/url].

FLV to MP3 free converter is a free YouTube, MegaVideo, Break and similar video sites to MP3 Converter and allows you to convert a video to MP3 file.

This software is fast, free, and requires no signup. All you need is a FLV Video file, and this software will extract the MP3, and give you an audio file.

So you are able to listen to your favorite YouTube tracks on every MP3 player.

This may be useful to you.