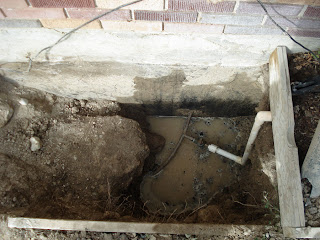 Well, I got kinda lucky... didn't have to dig as deep or broad as I thought (although the plumber hasn't arrived, so I may not be done yet). Background: last Fall, when shutting the valve to the sprinkler system, I knew it needed replacement. Luckily I got the valve shut off, after busting more than one gut! Also, the standpipe continued to have significant water in it all Winter. So, with hot weather finally arriving this Spring (now nearly Summer), I found I couldn't turn the valve at all.

So it was hire the digging out or do it myself. My plumber didn't have the resources for excavation, my gardener's crew was too busy, and I didn't know any illegals, so it was up to me. In a major effort of masculine macho, I attacked the dirty task. After the first hour, I felt I was having some success (the top 6 inches was all bark), and the valve seemed closer to the surface than expected. I quit for the day, and only needed a half bottle of Advil to recover!.

The second day found big rocks, one I barely removed, but, again, things went decently well although I was in tight quarters. The worst part was the water, the valve was leaking. I decided if I cleared out enough soil, deep and wide enough, the water would drain faster. Sure enough, it worked, and soon the valve itself was exposed. 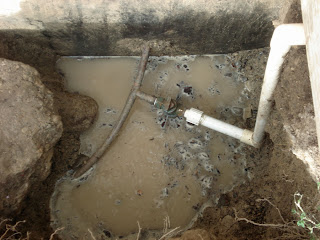 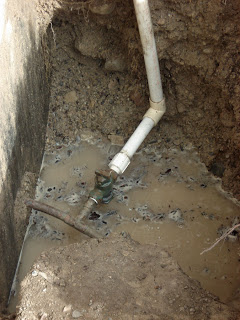 I managed to remove enough soil and rock to get a good view of things. Hopefully it's all I need to do for the plumber. And hopefully he can get over here soon, since temps hit the 90's soon and the grass is beginning to hate it. 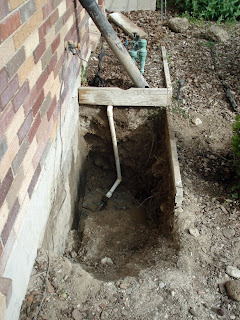 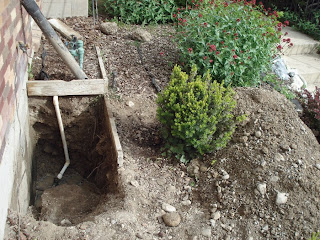 A big job, but I got lucky that it wasn't worse. Still, I deserve a beer... heading to the fridge right now!
Posted by Rev. Willis at 5:32 PM
Email ThisBlogThis!Share to TwitterShare to FacebookShare to Pinterest