Somewhat embarrassing... was invited to a party Sat. nite (happy 60th, Jim) but a friend and I cobbled together our nickles and dimes for a jug of cheap tokay and headed for the freight yards. Finishing the bottle, we passed out under a shady tree, not wakening until after dark. Maybe it was the hangover, but something definitely felt strange. I wandered down the line until I found an open Soo Line boxcar.

I peered inside, and discovered four bodies... four older men, probably expired from the heat. There were some empty guitar cases, someone had been there before me... A glint of moonlight on a dark object caught my eye... an old 78 recording mostly hidden under one body, the hard shellac protecting it from the heat. 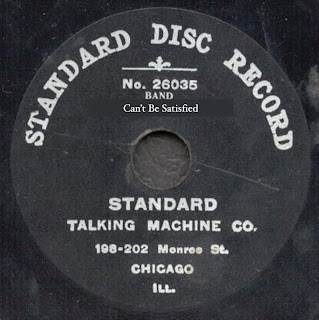 I grabbed the recording and took it home, spending the rest of the night recovering the audio and converting it to an MP3. Never heard this music or group ever before, nothing on the Internet. So here, for the first time, a rare 78 recording from an unknown, and now forever unknown, blues band...
Posted by Rev. Willis at 12:47 PM
Email ThisBlogThis!Share to TwitterShare to FacebookShare to Pinterest