...there's only noise!
The rallying cry of the punk rock group, the Atheists, from 1981.

I've worked on an Atheists CD project off and on for many years. Gathering documentation was difficult, but now I'm close. Of course, an actual CD may never happen, it's mostly to archive the results of a recording I did many years ago. 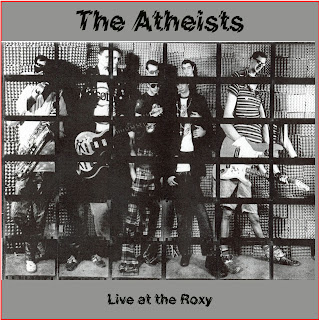 Back in April of 1981, during Easter Weekend, the American Atheists, with Madeline Murray OHair, held their national convention in Salt Lake City. The contrasts... atheists, Mormons, Easter, was not coincidental, I'm sure, but deliberately provocative. What was coincidental was the local popularity of a punk group, the Atheists, a homegrown musical scowl at the dominant culture. During the convention, a concert was arranged at a local club, the Roxy. I used a cool Dolby cassette recorder in those days to capture concerts, and I did so this night. I can't remember the sound man's name that night, but he was exceedingly helpful in mixing a great soundboard feed. A hellova great show!

Since then, I've dumped the tape to digital and played with mastering the files. My goal is a future web site where folks can download various formats of my recordings, with the Atheists part of a collection of SLC punk that will include the Classic Assholes and NuSpeak. Maybe enough folks will show interest that I can pay off web server costs, my tequila habit, and dinner with my ladyfriend.

Here's an mp3 of the Atheists signature tune, "There is No God, There's Only Noise."
Posted by Rev. Willis at 1:24 PM
Email ThisBlogThis!Share to TwitterShare to FacebookShare to Pinterest

The sound man was most likely Steve Mcallister. He owned the board and did most of our sound mixing.

I was there at that performance. I was co-director of the Utah Chapter of American Atheists, and host of that convention. I remember the leader of the band was David Fagioli, and he was a cool guy. His group set up a table at the convention with some bumper stickers. "Save you? God can't cure acne!"

Yep, I remember you. I worked for UTA and tried to keep track of the UCAA ads on the buses. Sorry the link doesn't work, I can't edit older posts. Try: http://www.revwillis.com/BlogLinks/noise.mp3

Hi! I'm doing a oral history on the Salt Lake City late '70s/;80s-era punk scene of which I was a supporter. I've interviewed many from that era including Michael Evans and Paul Booth. Would love to talk to you, if that's okay.