The torture never stops. After digging up the main shutoff valve to our sprinkler system for replacement, I then found, after a couple huge water bills, that the system had a major leak. But where? It's a big yard, the leak could be anywhere. However, there were a couple clues. First, none of the zones appeared to leak, so the problem was probably between the main shutoff and the individual zone valve manifold. Since I saw no leaks in the front while the first hole was open, the big leak had to be in the back yard somewhere.

This led to a guess... I had an idea where the main feed went under a cement retaining wall for the hot tub deck. Experience has shown that a pipe can vibrate against the cement and eventually leak. So I began digging. I soon found very wet soil, then as I got deeper, a pool of water began to form. Good news! But... to get to the pipe itself, I had to dig under the steps leading to the deck. Not good... the only way to do things was remove the steps... no easy task and very heavy... but with some help, it was done. 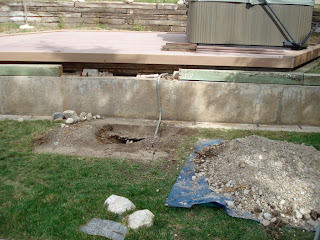 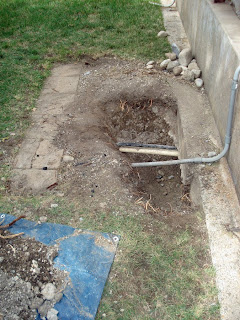 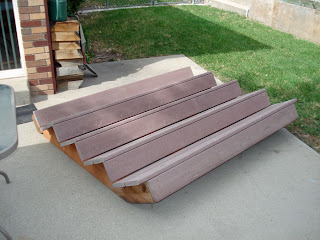 I finished digging out the hole. I also had to dig out under the front of the deck, since several distribution pipes are visible. Which is the main pipe? How will the leak be fixed? Can a new pipe be run to provide service? Not sure yet how things will go. 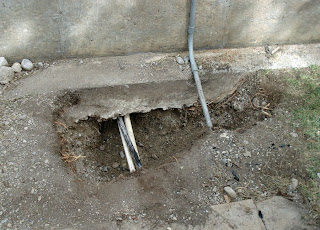 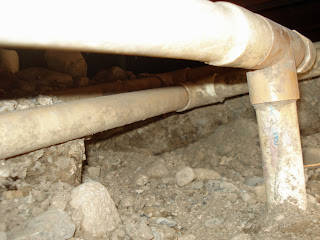 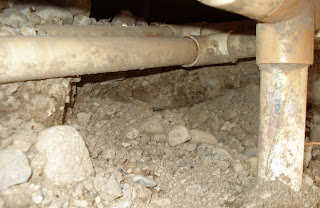 I turned the main valve on to try to identify the exact spot of the leak, but it appears to come from well under the retaining wall. There were some roots pushing up through the pipes, and some sharp rocks wedged close, plus a rough edge of cement pushing down on the pipes, so one of those probably wore through the feed pipe. 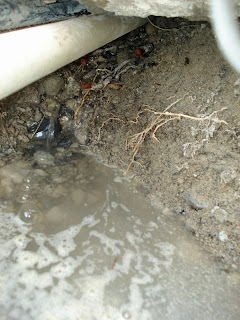 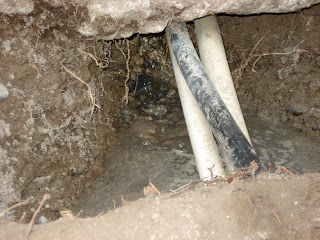 What a PITA! Not sure yet how to resolve this situation, and of course, what of the future? These sprinkler systems are a constant nightmare. Time to turn the whole yard back to desert!
Posted by Rev. Willis at 2:51 PM
Email ThisBlogThis!Share to TwitterShare to FacebookShare to Pinterest