So last month Willis, also known as the World's Greatest Guitar Player (he is pretty damn good!), tells me he has a gig with Buck's Vibe at Steamer's in Fullerton, CA.  Steamer's is a noted jazz club in SoCal (Orange County) and I enjoy going there (the lasagna is delicious).  Embracing the wonders of retirement, I decide to spend a week in SoCal, since one place is about the same as another these days.  A good idea, as it turns out, as Willis also had a gig at the Windjammer's Yacht Club in Marina del Rey on Sunday, and a cover band gig with Chain Reaction at the Kobe Steakhouse in Seal Beach.  Wow!  Willis playing in three different contexts in one week.  What an opportunity for me.

So after flying in, I drove up to Kobe's for dinner in the lounge with Chain Reaction blasting out the R&B and pop hits for a rather strange but enthusiastic crowd.  Bands like this are a great way for a guitar player to keep up his chops, especially on a Michael Jackson favorite.  (Sorry for the recording quality, I had some limitations). 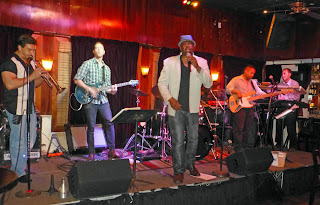 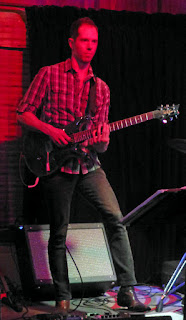 On Sunday, it was the L.A. freeway challenge...  a long drive up to Marina del Rey.  Only a couple slowdowns... and soon I was firmly seated in the club lounge.  Willis plays this gig in a quartet with a couple Buck's Vibe mates and the Israeli trumpeter, Itai. 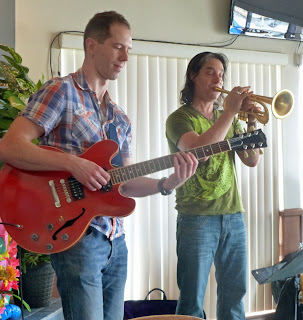 Pretty much straight ahead jazz with some funk, all quite well done, with an enthusiastic audience (love to see those $5s, $10s, and $20s go into the tip jar). This was a great gig, actually, and my friend Christiane even dropped by foregoing another day at the Playboy Jazz Festival to hear this group. Also it was Father's Day, so the music was a special treat for me. They did a fine version of one of my favorite tunes.

The following Thursday was the Steamer's gig with Buck's Vibe. If you haven't heard the CD, you should get it or download it. Terrific music. The group did not disappoint this night. Peter Buck's kids were there as well, adding some vocals to the set. Willis contributed some great guitar work to a Buck's Vibe standard, Steppin' Up. 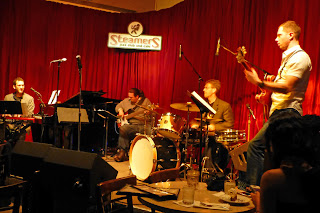 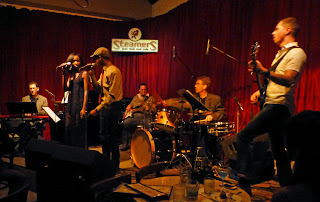 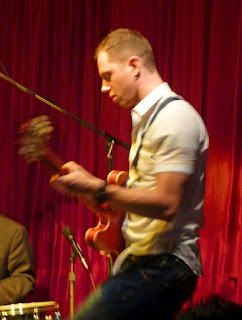 And I'm sure Willis appreciated having both parents at one of his gigs. 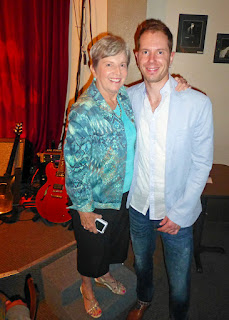 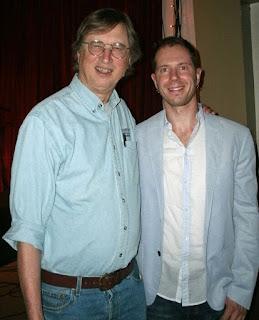 So a fine week of music.  Retirement sure makes for interesting opportunities, and the ability to enjoy the efforts of progeny.

Posted by Sherm Clow at 12:14 PM
Email ThisBlogThis!Share to TwitterShare to FacebookShare to Pinterest