Recently I watched a PBS program on Janis Joplin.  Other than censoring the swear words and fuzzing the occasional bare breast, the show was a very good overview of the life, career, and sad death of Janis.  One thing bothered me some, however.  The program seemed to imply that Janis was the only female singer at the time worth mentioning.  This is, of course, quite untrue.  There were several excellent female singers in the 60's, and in San Francisco, in particular Grace Slick of Jefferson Airplane who certainly was no vocal slouch.  Anyway, I found this picture which says so much about the time, people, and music of San Francisco during the 1960's psychedelic scene. 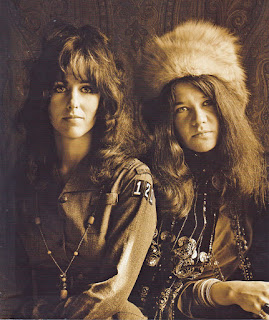 
Posted by Sherm Clow at 10:55 AM
Email ThisBlogThis!Share to TwitterShare to FacebookShare to Pinterest

I saw the same program, and was struck by how its message that Janis was the first woman to reach out past the group she was in during the late '60s and forge her own artistic identity. One of my most satisfying "Earth Anthem Audio" programs at KUER-FM in the mid-'70s was a review of "Buried Alive," Myra Freidman's excellent biography of her, which included some of her appearance on the old Dick Cavett show. Raquel Welch was one of the other guests, and I remember that when she came on after Janis's segment, she tried to show that she actually was quite intellectual. When Janis asked if she'd read any good books lately, Raquel said she'd just finished "The Great Gatsby". "That figures," said Janis. "You remind me of Jordan Baker." Then she chuckled as Raquel struggled to remember who Jordan Baker was.