I left Morton on a Sunday morning hoping to beat the rain.  I headed south to pick up US 36 once again, this time to drive across Missouri.  I made it to Hannibal before a downpour, which squelched any attempt to play tourist in the famous Mississippi city.  So on across Missouri, thankfully US 36 was all 4-lane at this point which made travel in the rain easier.

Not much to see, but I did pass through the home of sliced bread!  Of course the woman at the gas mart had no idea what I was talking about...

Then through St Joseph and into Kansas where the rain finally stopped.  Kinda fun crossing three main rivers (Illinois, Mississippi, and Missouri) in the same day.  Looking for a place to stop for the night, I found this... 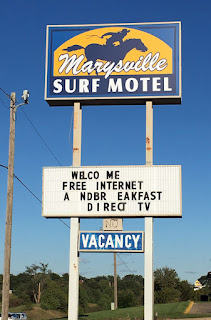 So, OK, Marysville and US 36 are part of the pony express trail, but the Surf Motel in the middle of Kansas?  At least it was a nice room for $50...  a good deal.

The next day, I continued on US 36...  and found this building in another small Kansas town. 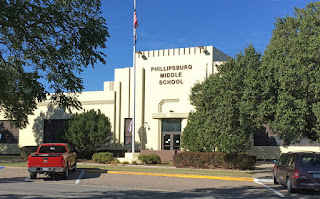 At some point, I found a way to cut south and hit US 24 that would angle down to I-70 in Western Kansas.  US 24 runs close to my home town back in Illinois, so I thought it would be fun to reunite with the highway.  Very worthwhile, a sort of scenic route until I hit I-70, wherein Western Kansas turned into a million square miles of corn, buzz cut flat for as far as the eye could see.  Way boring!

I-70 took me to Denver, and I decided to just follow it home.  Thankfully traffic was light for the remainder of the trip, and Glenwood Springs canyon was absolutely beautiful in the late morning light.  A long drive that day but I made it home.  Quite the adventure, all in all.  I highly recommend lazy road trips on America's alternative highways.

Posted by Sherm Clow at 9:47 AM
Email ThisBlogThis!Share to TwitterShare to FacebookShare to Pinterest