I big reason for the Death Valley excursion was my fascination with Zabriskie Point, mostly from the Antonioni movie of the same name. Hell, any movie that uses Roscoe Holcombe in the soundtrack, along with the Grateful Dead's "Dark Star", is OK in my book. Then there's Daria... 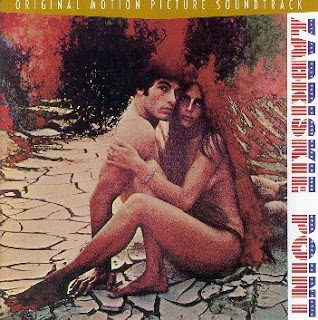 -------------------------------------
I Netflix'd Zabriskie Point, a really silly stereotypical look at confrontational politics and free love of the late '60's, beyond unrealistic. Totally ridiculous and self-indulgent. I mean really dumb. With Rod Taylor as the evil land developer, Mark Frechette, now deceased, as the heroic(?) campus rebel, pig killer, and James Dean wannabe, and despite her good looks, Daria, the secretary, who is dumb as a post. After killing a cop at a campus demonstration, Mark steals a Cessna and flies over LA with Dark Star in the background, while Daria cruises the desert in her Buick Roadmaster. She's on her way to Phoenix, and you just know they're destined to meet. There's even a Lord of the Flies sequence at a ghost town with some kids who try to rape Daria, which freaks her back onto the road in her Buick. And there's the the North by Northwest Daria buzzing scenes with Mark flying low (at least he was a decent pilot). This movie is dialogue-optional. Daria: "Did you really steal that thing?" Frechette: "I needed to get off the ground." And bingo, they drive right up to the Zabriskie Point parking lot. Everything and everyone wanders aimlessly, including Frechette and Daria, through Zabriskie Point, for hours, no food, no water, eight zillion degrees outside, but they're fine. The script may have been interesting, but on the screen... I'm not sure I can wait for the sex scenes. May have to fast forward. OK. Sorry to disappoint you, Sherm, but they weren't that great. Frechette: "I always knew it would be like this." Daria (looking into his eyes longingly): "What?" Frechette: "The desert." The plane then gets a John Lennon Rolls Royce treatment, and Mark flies back to LA, where he's surrounded and shot by one of those nasty pigs. Daria hears about it on her car radio, somewhere in the middle of a cactus grove, and we get that "I'm going to do something significant" look, and after Daria communes with a waterfall aside Rod Taylor's desert mansion, boom goes the house and all of those bad guys and their obnoxious wives, TV sets, cars, refrigerators, etc. I guess it was supposed to be a light show or something. Did Daria do it with mind power? We'll never know. The end.
---------------------------------------------

Mind power? Well, she did join Mel Lyman's cult for some time. Left that and married Dennis Hopper... All so curious...
Posted by Rev. Willis at 11:05 AM
Email ThisBlogThis!Share to TwitterShare to FacebookShare to Pinterest