From the Hard Rock in Vegas to the NAMM show in Anaheim, we had quite the day. OK, I don't know what NAMM stands for except music is in there somewhere, and the convention draws some of the most incredible people in SoCal and beyond (oh, it's supposed to be about the gear, but the people who attend are endlessly fascinating). First are the babes... they remembered me from last year and the year before and wanted me even more. 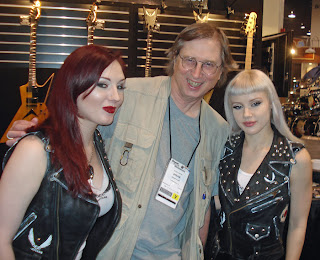 Ran into Dick Dale again this year. He's still alive after multiple surgeries... he described a litany of internal disarray, but looked pretty good, other than weight loss. Best of all, he has a new babe, Lane, who was of significant help with his recovery. I can imagine! 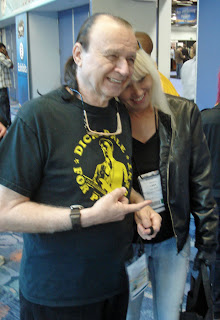 I'm officially boycotting the Rock and Roll Hall of Fame until the King of Surf Guitar is honorably inducted.

Finally, for today, was the return appearance of Jimi Hendrix. What a thrill! Two guitar gods in one day! 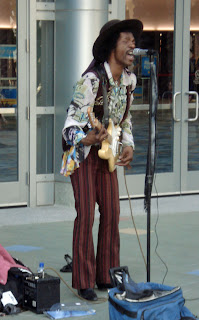 Succumbing to exhaustion, we bailed early... to fight the madness another day.
Posted by Rev. Willis at 9:36 PM
Email ThisBlogThis!Share to TwitterShare to FacebookShare to Pinterest

I'm all for the induction of Dick Dale,but I should point out the real tragedy of the omission of the most imporatant guitarist of all time ..Link Wray! The man undoubtedly invented the power chord and all it's ferocious glory.If it wasn't for Link Wray rock'n'roll wouldn't be the same!

I agree completely... and I'd add Davie Allen to get the holy trinity of rock instro guitar.