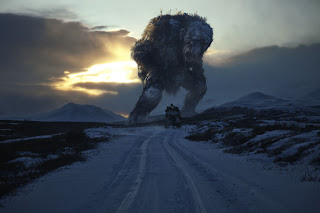 Another sleeper of a movie, really good, well done, definitely worth seeing... and, actually, quite scary! Like Rare Export, Troll Hunter is based on mythology... this time Norwegian trolls (Rare Export brought back the ancient Finnish Santa myth). The movie is done similar to the old Blair Witch Project, with a film crew trying to document bear hunters, but coming across a rather strange and secretive hunter who is after something much bigger than bears. But I think Troll Hunter beats Blair Witch at its own game... the trolls are real, obvious, scary, and after the Christians! (there are many understated jokes in Troll Hunter, which add to the fun... are Muslims safe?).

Unlike all the vampire crap that's come out in the past few years, where the vampire myth is reduced to teenage romanticism, Troll Hunter keeps the connections to the past, with only minor updating of troll myths for modern times (baiting trolls with old car tires is interesting... I wonder if there is something about odd about tires in current Norwegian culture... trolls as recycling agents?).

So the second Scandinavian movie of the year that has surprised and pleased me... both working with myth, both creating a modern times movie that maintain and entertain with cultural myths. Next, the devil claus meets the mountain troll!

Posted by Rev. Willis at 6:21 PM
Email ThisBlogThis!Share to TwitterShare to FacebookShare to Pinterest