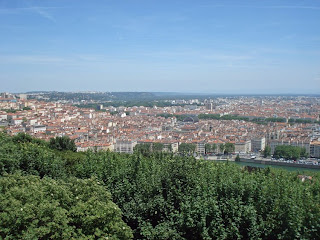 A last shot of Lyon... Early Weds. morning (5:00am!) I caught a cab at Gare St. Paul for the Lyon-St. Exupery airport and the flight to Paris and then back to the good ol' US. The cab driver had more electronics going on in his cab (mostly GPS related, I suspect) than I'd ever seen before. I'm not sure I'm thrilled with electronic driving, I mean, a cab driver should know where the airport is, right? But by whatever means, he got me there before the counters had even opened. They have some new machines, you stick your passport in a slot (scary, will it ever come back out?), and after a couple screen prompts, out comes your boarding pass... in my case, one pass had both flights on it.

More croissants on the flight to Paris, after a brief breakfast at the Lyon airport (a petit kaffe is an expresso, if fact I think all kaffe in France is an expresso, thought I'd embarassed myself, but everyone was having the same thing). Some wandering around DeGaulle airport, it's immense, event if you are in the same terminal. But my superior intelligence guided my way through about 10 security checks (they know my nefarious past!) and all the duty free shops to the proper gate. After a hour or so, and more security checks, I was on the plane. While the biz class food was pretty decent on the flight over to France, somehow it sort of sucked on the way back. I wonder why? Worse, since I've returned, now I have to suffer through my own cooking! My palatte has been expanded by eating such great food in Lyon. Nothing is going to compare.

Here's some odd pics just for fun. First, a broadcast tower, high on the hill, covering the city. 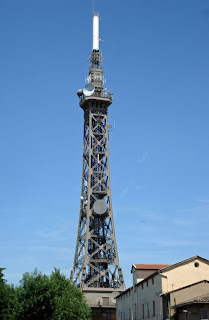 One contrast with European and American citys is age. Euro cities are just so much older, and have maintained their history and tradition very well (no demolish and rebuild, only restore). But that means that modern conveniences, such as communications systems, are hard to wire in and around old buildings. TV antennas and cables are strung all over. Here's one bad example of exposed wiring: 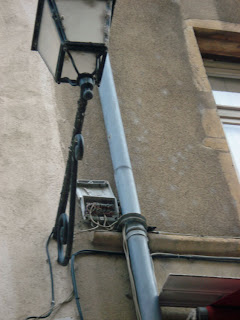 And everything is smaller and crammed together unlike, in particular, SLC. Old streets mean narrow streets. Old buildings mean tidy apartments, and all modern industrials are scaled down. Here's our apartment water heater, installed above the kitchen sink. Looks like not much capacity, but all I know is it easily handled consecutive showers. Pretty efficient. 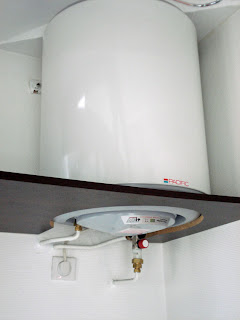 I think I mentioned that I enjoy the everyday style/design of living in France. Much cooler stuff than in the US. Here's a wall heater, a light switch (with dimmer), and a knife set with the sink fixture: 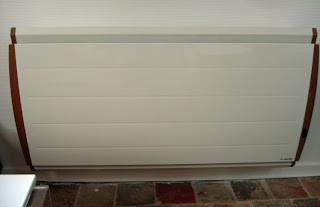 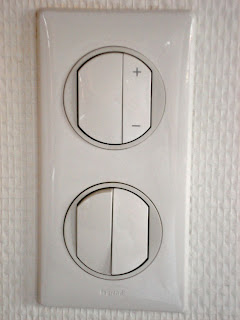 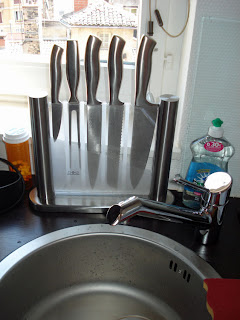 Maybe things are older in Lyon, but that doesn't mean that technology is lagging. Almost every restaurant we dined at used these cool, wireless I presume, handheld credit card terminals. Instant receipts! Much better than the myrid and inconvenient check out systems found in the States. I've longed for the old "ka-chunk" manual credit card machines, but no more... I hope this wireless system gets adopted in the US real soon now... 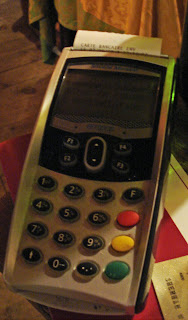 OK, bored with these everyday examples? Check out this building design. This is terminal 1 at the Lyon airport: 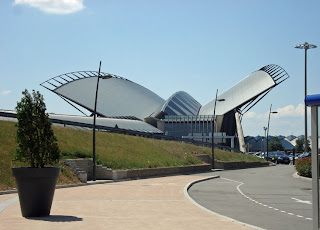 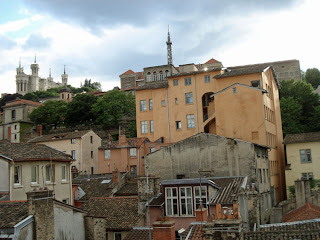 My thanks to the Marquesa Yvonne La Cey for her knowledge, generosity, and travel agent abilities, all of which made this an incredible experience for me. I hope we can return for an even more lengthy stay in a couple years.

I've returned to an exploding Lost Clowboy Desert, lots of June rain is doing wonders for the garden. I'll continue this blog with pics from the garden, and some shots from the big move (yes, we are moving into a house up on 13th Ave.). Stay tuned!
Posted by Rev. Willis at 7:57 AM
Email ThisBlogThis!Share to TwitterShare to FacebookShare to Pinterest