The weather here has been great. Perfect temperatures for walking around. A couple brief thundershowers, but, until today, nothing that would interfere with our exploring. However, after setting out today, the rains came. We made it to the center of town and sought refuge in the Opera House. We couldn't see inside the performance area, but was able to take an elevator up several stories to a small cafe, where we "enjoyed" the world's most expensive bottled water... As the rains let up, we took some pics across the plaza to the Hotel De Ville. This isn't a hotel at all (the French have several meanings for the term), but rather the "city hall". And, yes, they do get many requests for rooms from tourists... 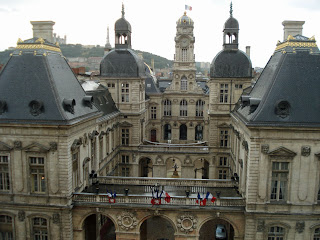 After some stories of her student groups getting "detained" by the gendarmes while conducting research at the Hotel de Ville, we took the obligatory shots of each other with the "hotel" in the background. 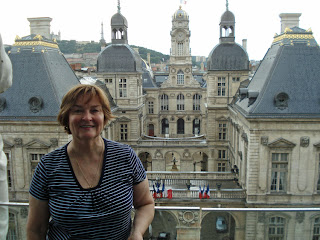 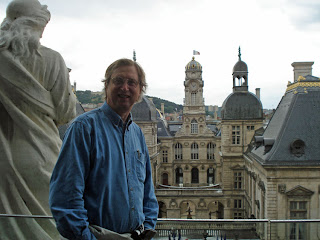 We paid out bill, "l'addition, si vous plait", and ventured out once again. Here's the Hotel de Ville from the other side... truely a magnificent old world building. 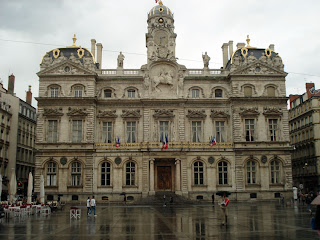 And, in case you are getting bored with all this, here's a stunning classical statue... check out the detail on the horses... and that's real steam coming out of the horse's nostrils... interesting plumbing trick. 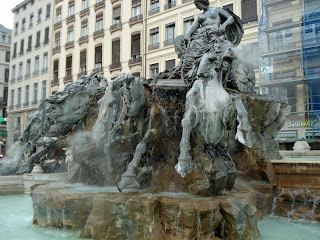 With the rain coming and going, we caught a bus for a tour of the Croix Rosse area of Lyon, It's up on a hill overlooking the city, and supposedly the area of the famous silk weavers of Lyon. Sorry, no pics, the bus driver was rocking and rolling the vehicle back and forth through narrow streets as we wound our way to the top.

After returning "downtown", we bailed on the whole tourist thing and went to the movies. Found an English movie with French subtitles... "Good Morning England", a wild take on the pirate radio ships that broadcast offshore Britain during the 60's and 70's. Great movie, hilarious, and great music... go see it if it ever comes to town.

Dinner at a French "steak house". Pretty good, nothing fancy, good wine (chilled red, a little unusual), fairly priced. A bit more exploring then we bolted for "home", getting there just before the really big rains started pounding.

Tomorrow Lacey delivers a paper, and I'm on my own. If the weather is good, I want to visit some Roman ruins.
Posted by Rev. Willis at 1:15 PM
Email ThisBlogThis!Share to TwitterShare to FacebookShare to Pinterest