So I hiked off the the Musee de Gallo-Romains up on the hill above Old Lyon. Up the stairs, up the street, up another street, around a corner and up yet another street and I'm finally at the top of the hill. Great view of the city, now where's the museum. Ah, a sign, OK, but first let's get a glimpse of the old Roman ampitheater... I hear music... holy shit (Mon Deiu, Sweet Mother of Mary)! the ampitheater has turned into a major performance area! 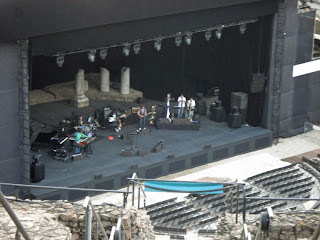 So before the museum tour, I settle down for some good French jazz-pop. Must be a sound check for tonight's performance (I found out later that performances take place here all summer long, jazz, pop, classical... Herbie Hancock and Lang Lang are on the same bill later in the month!). I actually got a little video of a beat poem in French with music accompaniment.

Well, as I found, the ruins have been preserved nicely above the ampitheaters (there are actually two, a large and a small, both of which were originally full-on colliseums way back in Roman days). Here's an overall view of the ampitheaters: 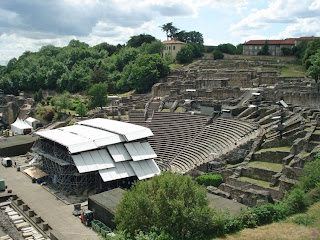 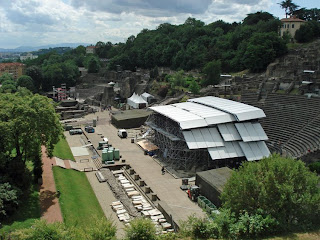 And a couple closeups of genuine Roman ruins... 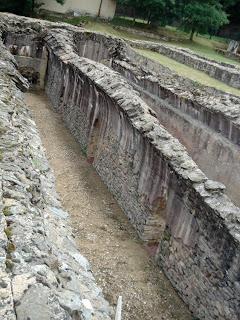 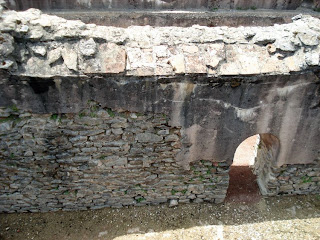 The ruins area is quite extensive, and you can hike pretty much all over the area. Really lots of fun, but the really cool stuff is in the museum, except you can't see the museum! It's built into the side of the hill overlooking the ampitheaters, almost completely covered with earth and folliage, with just a couple turret-like windows poking out. It really is a magnificent museum, all modern structural concrete, a great example of architectural siting, structure as form-follows-function, and appropriate materials for the purpose. Once inside, you are led under concrete beams deeper and deeper into the facility, like wandering down into your own archelogical expedition!

The exhibits are extensive and thorough, most in English as well as French. No pics allowed, however, so here is the museum web site: Musee Gallo-Romains. The best were the mosaics, especially the one with Baccus on the black panther! Also it helped my self esteem to know I'm better endowed than Jupiter and Mercury, the great Roman gods!!!

After leaving the museum, you can actually get on the roof for some views of the city and the shots above of the ampitheaters. And a shot of the museum itself for an example of its siting. 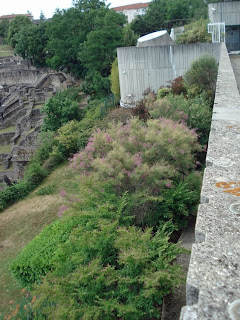 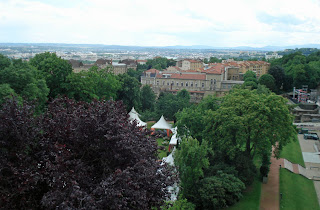 That's it for awhile. A last French meal tonight and an early morning cab ride to the airport tomorrow. Hours and hours of air time to get back to the good old US. I suspect I'll have some wrap up after I get home. Stay tuned!
Posted by Rev. Willis at 8:17 AM
Email ThisBlogThis!Share to TwitterShare to FacebookShare to Pinterest