Fairs and Festivals in Lyon 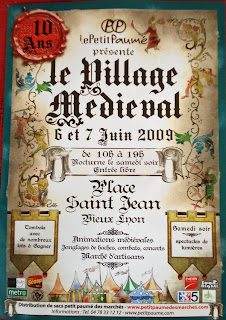 Today was the big day for fun in Lyon, for the whole city. In Veiux Lyon, the Midievil festival took place, but it wasn't really that exciting. Some cool things, like midievil sex: 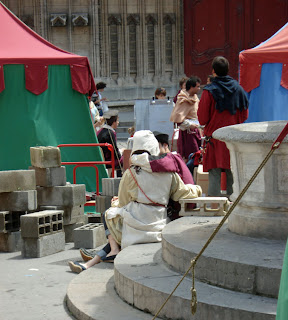 and some pretty authentic get-ups, including the renaissance dude with his RayBan Wayfarers, but it was still fun, especially since it was local and within the appropriate part of town (the oldest part of the city). 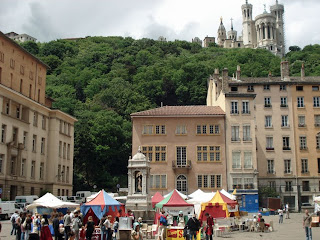 Then we crossed the river to Bellcour and the world festival. My god (mon dieu), what representation! We got there just in time for the young Turkish dude to fire up his oud-like stringed instrument. 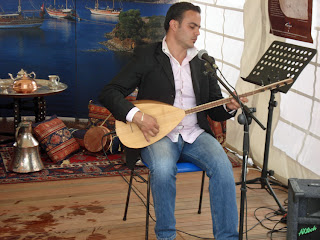 I'd spent big bucks on the best flash audio recorder and thought I had a nice recording of this guy's performance, but, alas, it was not to be. Basically, I fucked up! But, since there was an oompah band blaring away on the stage behind me, I guess I didn't really miss much. Still, it would have been fun to post some audio.

Lacey then decided to seduce the entire Swiss brass orchestra... 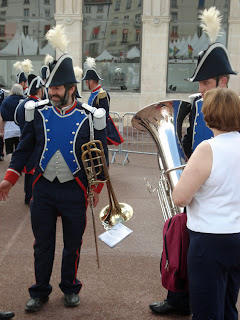 They said they were going to play at 2:30. It was already 2:45. Something got lost in translation, and we never did hear them.

I spent some time in the African tents. I love the shirts/dresses. They are so colorful! 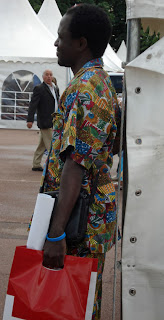 Most of the sub-saharan tents had food and drink. I thought I'd try this little cup of fruit juice. A young woman did whisper something about "very spicy", but fruit juice? Took my head off! Do they have habeneros in Africa? Don't ask me which country this was, there were more African countries represented at this festival than in the continent of Africa...

Lacey spent some time at the East European tents. She's getting very interested in visiting there, looks really beautiful in some of those countries. She also visited the US tent and got a brochure on Utah, Elevated, in French!

We wandered up the main pedestrian shopping street and caught the tail end of the world parade (very informal, the crowds mixed equally with the "marchers"...). The Thai babes really had it going on, and the Africans once again demonstrated blazing colors. 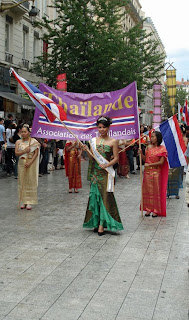 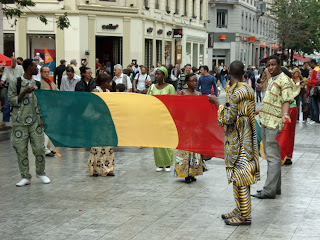 We continued up the street to, I believe, the "Independence Plaza", where there's a beautiful carousel. 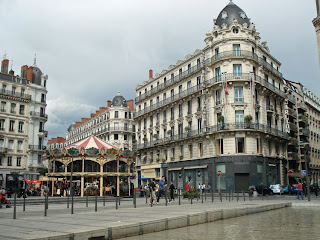 Then back to the apartment for a rest and a little blogging. Tonight, perhaps dinner at a little cafe right on our street... the Rue Juiverie is about a block long and 10 feet wide, yet contains a couple clubs, a couple cafes, and several other businesses. I'm amazed at what gets crammed into such a small space in this neighborhood.
Posted by Rev. Willis at 9:47 AM
Email ThisBlogThis!Share to TwitterShare to FacebookShare to Pinterest