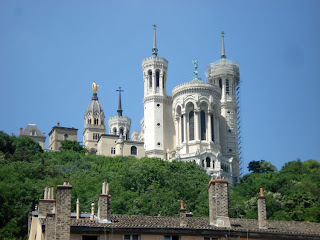 So Veiux Lyon is just west of the river Saone. The area is not very deep, since it begins an immediate rise to the west up a significant bluff overlooking the city. And, on top, is a magnificent basilica, shown above. I hiked my brains out, up several flights of stone steps, then up a street, and finally wound back and forth up some beautiful gardens to reach the top. Lacey, ever wise, took the bus!

Anyway, a couple pics of the basilica, but there is no way this poor photographer can even begin to capture the magnificence of this structure. Seems like any trip to Europe requires a stop at some great cathedral or another, this was ours for this trip (interestingly, the Basilica is not that old, built in the 1800's, rather than 1600's). 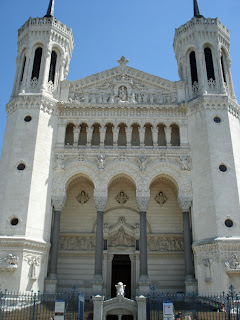 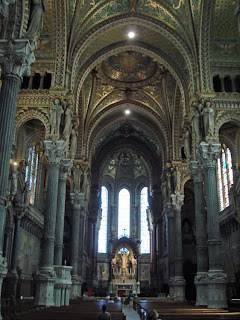 So here comes my brief editorial comment on Mary. I mean, what is this deification of Mary? I thought Christianity was all about the big three: God, Jesus, and H.G. So the Catholics in particular seem to spend way too much time on Mary. I mean, she was just a vessel... Was there a moment of intense feminism way back there in church history that got Mary elevated in importance? After all the mosaics and windows and statues of Mary in the Basilica, I found myself cheering on Jesus. Go, dude, reclaim your importance in the Christian pantheon! OK, now I've pissed off all the Catholics in the audience (you know, blogs provide for easy comments after each entry), but they sure do build some incredible edifices, very soul-stirring even to this heathen.

And a couple views of Lyon from the Basilica, looking toward the East: 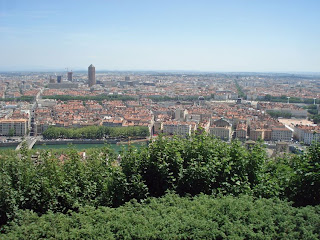 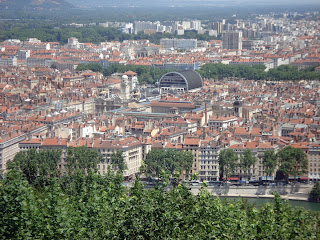 The core of Lyon is actually between two rivers, which converge at the south end of the city. The river Saone can be seen at the bottom of the above pic, the river Rhone is at the tree line at the top of the pic. The modern round roof building is actually the old opera hall. Up close, the old building is still there, it was modernized, rather than torn down, with the new roof. Curious way to do things.

OK, after spending hours above the city, we descended through the rose garden. And here's a pic of Lacey on the path down: 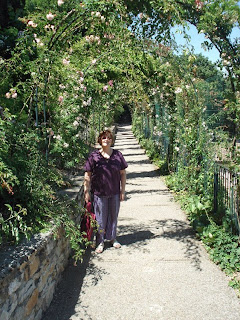 So I'm still a day behind with stuff. Will try to blog more later, but we are off to see the French Elvis, or now the French Clint Eastwood.
Posted by Rev. Willis at 1:54 AM
Email ThisBlogThis!Share to TwitterShare to FacebookShare to Pinterest

"Just a vessel..." indeed! Despite your heathen disregard for the Mother of God I am appreciative of your mostly amusing narrative of the Baron and Lacey's adventure in France.
Look forward to hearing some music reviews - any chance that a soundtrack to the trip will be released at a later date?

I have my flash recorder with me; however, not much opportunity to use it. After 3 hour meals, we drag our asses back to the apartment after 11:00pm and collapse... Not much energy for clubbing! Anyway, it's all karioke, disco, and techno around here, which is fun for 5 minutes. Did catch a bit of US classic rock, but finding really good jazz is difficult. Will try to find some world music today at the big expo.