Odds and Ends From Lyon

We are still recovering from last night's dinner. Such a blowout, at a very expensive restaurant. I'm definitely getting to like champaign (at least Moet!). Quite frankly, although some parts of the meal were quite delicious, I was disappointed overall. The veal was half tender, half tough... Some sauces were way too strongly flavored. But other parts of the meal were to die for... the single blueberry in an orange flavored palate cleanser was so cute! We did have the sommeilier choose wines for us. First was a white wine, extremely delicious... don't ask me what it was, I think he did mention something about "sauterne" !!! And often the French serve a cheese course after the main dish and before dessert (or as dessert). So we quickly ordered a glass of red to go with the cheeses. Again, I have no idea what the wine was (just another French wine!). Now I'm not a big fan of blue cheese, but a bite of really good blue cheese with a sip of really good red wine is truely an orgasmic experience. Ah, yes!

Anyway, I'm having some minor difficulties with dining in Lyon. First, dinner doesn't begin until at least 8:00pm. The restaurants open earlier, but don't even want you to show up before 8:00. Then the meals last 2-3 hours. It must be a feminist plot! Men forced to talk to their partners to pass the time between courses! And no sports talk! Ah, well, stare into each other's eyes and proclaim true love...

Lacey insists that the French only go out to dinner occasionally, and experiencing the amount of time required, I understand why. Yet there are so many restaurants and so many people in them, I doubt her. Either she is incorrect, or there just are a lot of French people, all taking turns dining out!

OK, some pics. First a stairwell in veiux Lyon. And a friend protecting us from his window ledge. (remember, you can click on the pics for a larger image). 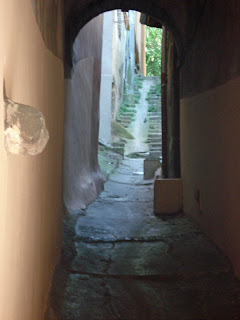 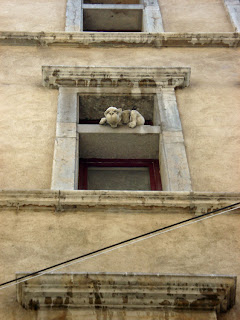 And a couple shots up and down the river Saone: 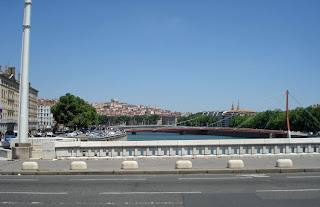 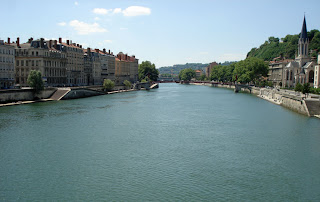 And, finally, a tree. These trees, of unknown variety, line the Parc Bellcour. I hope you can notice that the top of the leaves are dark, the bottom of the leaves are light. Rather amazing, we've never seen anything like it. Very impressive... 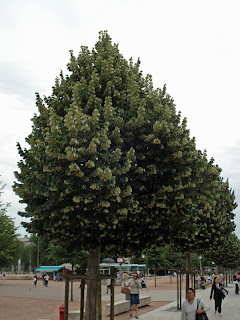 Now it's time to explore some more. A midevil festival "in the hood", and some sort of world festival at Bellcour. Gotta get going.

(You can leave comments after each post. Use "anonymous" if you like as identity).
Posted by Rev. Willis at 2:27 AM
Email ThisBlogThis!Share to TwitterShare to FacebookShare to Pinterest

click on the link below n win a I phone