Fortified with market provisions, we decided to hike off to the Musee Lumiere. Well, this was an ambitious hike, as it turns out. However, we did find the University of Lyon branch where Lacey makes a presentation on Wednesday, and we did find the Alliance Francais where she will take intensive French lessons next week. 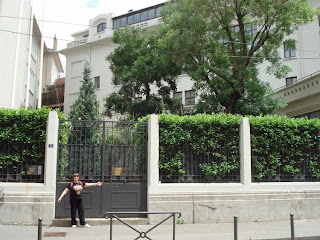 Exhausted, we finally arrived at the museum. 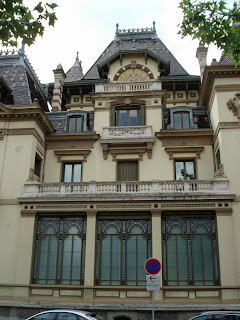 The Lumiere brothers were instrumental in the development of cinema at the turn of the 20th century. Their original house serves at a museum, along with beautiful grounds, a warehouse (studio), and other exhibits. Rather than try to describe everything, there is an Institute web site with better pics and info on activities. I will note that the Lumiere brothers developed early color photography and also messed with 3D. This was a fun museum, but the best part was the house itself. Here's a couple photos of the interior... the ceiling and windows of the winter garden room. 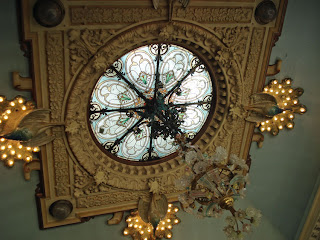 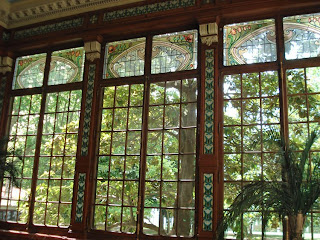 Thankfully the museum was right on the metro, so we took the subway back directly into Vieux Lyon. Lyon has an amazing public transit system... subways, trolleys, buses. I think you can get anywhere in the area quite easily via public trans, assuming a little experience to figure things out.

After a well deserved rest, we left the apartment around 8:00pm for dinner (I should be in bed!). We checked out few places, then, suddenly, while I was looking at a posted menu, Lacey disappeared. I looked around and found her sitting at a table (I guess she decided!). Turns out it was the last unoccupied table for two (the restaurant would not seat two at a table for four!). It was a rather strange place... dark, romantic, and I felt I was a part of the French Resistance... fearing Nazis bursting through the door at any second to arrest me (we had been at the resistance museum earlier in the week). I was reminded of this Thelonious Monk album cover (unfortunately, there was no jazz piano music at the restaurant). 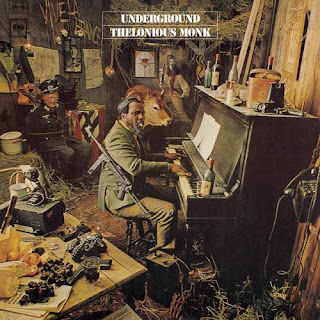 Well, it wasn't quite that dingy, but my imagination was running away with me, especially after the champaign apertiv...

Most importantly, food was excellent, maybe the best we've had all trip. Pork fillet, chicken breast rolled around a soft, white cheese, and many other goodies. The desserts weren't quite up to snuff, but not bad. And the wine, while excellent, cost us more than expected (the one downfall of allowing the proprietors to choose house wine for you). But we were very happy staggering back to the apartment. We never found out the name of the place, this is all that appeared on the outside of the restaurant: 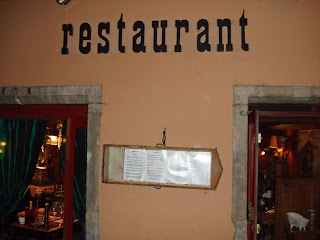 This morning I checked the credit card receipt and found a more descriptive name... "The Nave of the Fool", as translated. They have a very nice web site, although the pics on the site make the place seem more formal than reality. Still, this was a restaurant and a meal to remember.
Posted by Rev. Willis at 2:53 AM
Email ThisBlogThis!Share to TwitterShare to FacebookShare to Pinterest