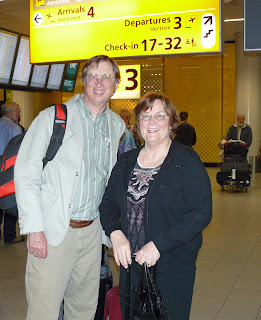 As indicated before, Miriam and I made it into Amsterdam. KLM was kind, but no sleep til dawn, or something like that. After a brief tour of the Centrum, we had a great dinner then slept 12 hours.

Everything in Amsterdam seems to point to the Centraal Station (don't ask why the Dutch always have to double their vowels)... buses, trains, trams, canal boats, whatever.

(and, as usual, click on the pics for a bigger image) 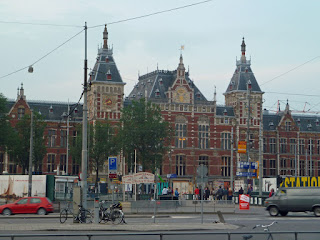 This is actually a much bigger building, and behind it is all sorts of rail terminals, and underneath is more train stuff, and subway stuff (how can a country below sea level have subways!!! Boogles the mind!) and out front is trams and buses and BIKES! Holy shit, there are more bikes than people in this country (true!). But more on them later...

Thankfully, our hotel is basically across the street (and tram lines, and bus lanes, and bike lanes). The Victoria is very nice, if noisy for all the traffic and humans (it's a "central" point of the city, after all, crazy with people...). 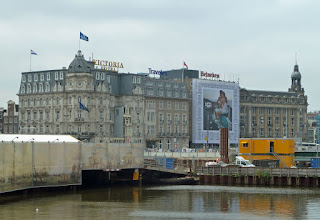 Oh, and there was a transit strike going on (govt. cutbacks as opposed by the union). So at one point we were treated to a bus parade, complete with honking horns, streamers, police escort, etc. Pretty cool... a very tolerant country, and totally dependent on public transit. The buses were followed by a clown protest (!?!). A very, very tolerant country... here's the tail end... 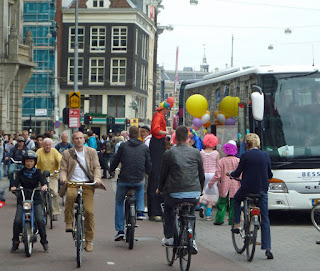 Lots of construction going on in this area (yet another subway... how?). One cool thing I noticed immediately, the barriers surrounding construction sites become art museums. A way cool thing to do... let the artists provide some eye candy while the construction goes on behind. Here's some examples... the ones that caught my weird eye. (and, no, I have no idea what any of it represents or means...) 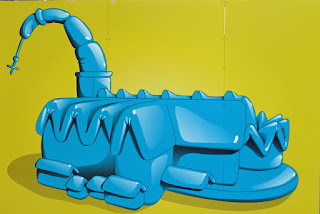 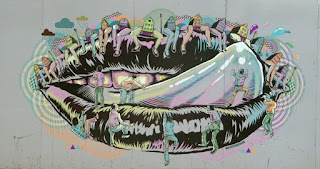 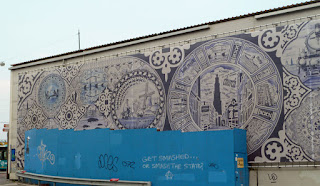 Right down the street is the sex museum. I'm headed there as soon as I finish this. Also, some other curious sites. 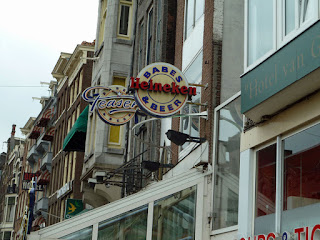 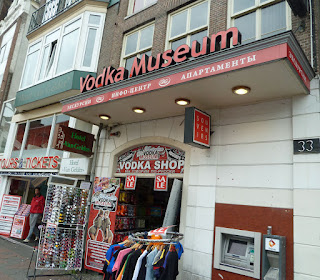 Yeah, I know, you were expecting museums and classic buildings and stuff like that. Well, here's my first canal. 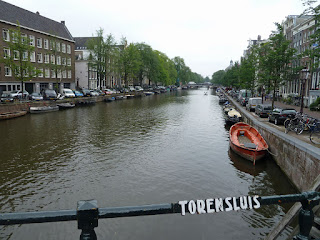 A rather quiet, residential street followed this canal. As we walked along, well outside the "red light district", we did find our first "lady in the window". A nice blonde, a little older, but quite enticing in black lingerie... Experience counts... No pics, not proper form to take pics of the ladies... a little respect for the world's oldest profession.

Lots of spilfs on the street, and lots of "coffee shops". Nice to smell the hash again, always a favorite scent. No wonder we slept 12 hours...
Posted by Rev. Willis at 7:29 AM
Email ThisBlogThis!Share to TwitterShare to FacebookShare to Pinterest