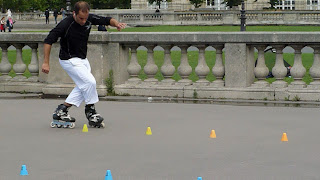 Walking through the grounds of the Invalides, we found a few cool "sporting" events going on. First was rollerblade dancing. Not that big of a deal, except when you consider they did their moves along a straight line of 20+ tiny cones. I filmed a little Quicktime movie of this, available here... (I don't do YouTube...).

Further along, we found old guys playing with their metal balls. Not sure what they call this, a French variation on bocce ball, but there were several groups of older men playing this... and they were very good. I especially liked the little chains with magnets that picked up the balls so the old guys didn't have to bend over. 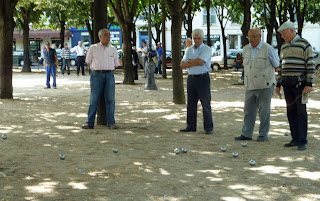 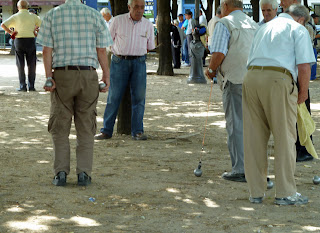 Posted by Rev. Willis at 7:59 AM
Email ThisBlogThis!Share to TwitterShare to FacebookShare to Pinterest

The game of boules, otherwise known as pétanque , is perhaps the sport that is closest to French hearts. Similar to British lawn bowling or Italian bocce , the French version is traditionally played with metallic balls on a dirt surface beneath plane trees, with a glass of pastis at hand. The local boulodrome is a social focal point in southern France.
http://www.discoverfrance.net/France/Sports/DF_boules.shtml

Also found bottles of wine and other spirits with very thick bottoms. Keeps the bottles stable on the ground while the players continue with their game.