...at the Huntington Beach Pier. The International Surf Museum in HB does a series of concerts each summer featuring, well, surf music. There was a big event yesterday, so I went over and let the sun burn the hell out my skin and the music blast the hell out of my ears. But it was good...

I was quite pleased to see the return of John Blair, with his new band, the Trespassers. John Blair is a monumental figure in surf music, a leader of the second wave in the early '80s with Jon and the Nightriders. Also, he is the major discographer of the entire history of surf music. Most importantly, he still plays great. 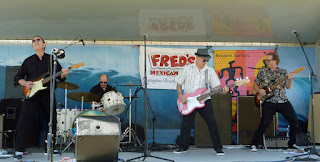 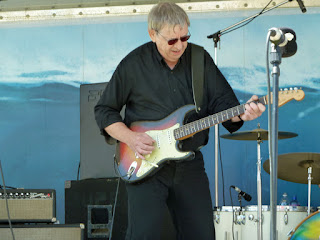 Next up was Outer Wave. Surf music seems to attract older musicians, who grew up under the influence of the '60s surf sound. These guys could use more stage presence, but they know what they are doing with their instruments.

There's also a third wave of surf music going on, as the sound is now embraced by younger musicians, and often enhanced with more modern rock tendencies. The Tequila Worms, from Anaheim, are surprisingly good for their age. I really enjoyed their set.

Another newer group, the Volcanics, also are quite competent at the surf sound. However, they do suffer from being a trio. I have a thing about this, for great surf music, there must be two guitars... the rhythm guitar adds so much to the overall sound.

Another trio, from Las Vegas, is Thee Swank Bastards. They also could use a fourth player, but their stage act, and the wonderful Zandora, make up for any thinness in their sound. What a fun group! Zandora kept it clean for the "family" audience... but catch them at the Double Down if you ever get the chance. 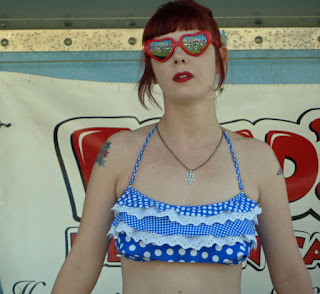 The finale of the afternoon featured Slacktone, simply one of the best bands anywhere. Dusty Watson is such a great drummer, and Dave Wronski is a guitar monster, and Steve Ryan, filling in on Bass... well, they create surf music with attitude.

Quite an afternoon of surf music. It's been a couple years since I've heard it live, but now I have my fill, at least for a few months. Nothing like surf, sand, sun, bikini babes, and surf music for the perfect SoCal afternoon. (and I got it all recorded, sounds quite good using a Rode stereo mike... more on the sounds later).

So, a very full weekend in OC, I'm exhausted and haven't even left to Europe yet! (just hours away, now)
Posted by Rev. Willis at 10:07 AM
Email ThisBlogThis!Share to TwitterShare to FacebookShare to Pinterest