Miriam is off to a conference, so I'm on my own in Amsterdam. I immediately head to the Red Light District... no, no, not there... try a museum or something... Well, I'm not that much into museums or the usual tourist stuff, they are OK, but what else is happening? So off I go on a walk. The original goal was to find the Chet Baker hotel, but that was accomplished quite easily. So I just continued along the street to see what I could find.

Some amazing bars and pubs in this town. Real old world decor. And then I found this... 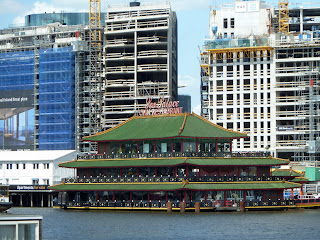 ...an amazing Chinese restaurant sitting in the middle of the harbor area. Never could find how to get to it, but I'm sure its a fine restaurant.

Onward around what's called the Maritime area (another museum, but seemingly closed due to construction). Then I found this character... 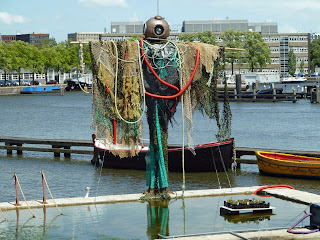 Brak, he's called, short for brackish... apparently a Dutch university is exploring sea water agriculture (the salinity of the water in Holland is increasing). The figure is also associated with this architecture group, ARCAM... and what an office building! 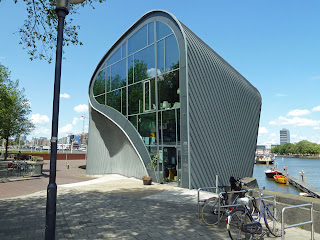 And then over a canal, some neat boats tied up to shore... 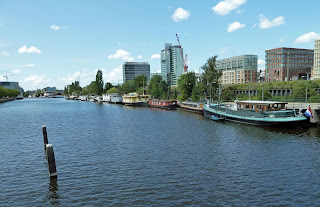 Over the canal, I ran into a whole series of office buildings and apartments. At first I thought I'd entered a slum area, based on this building, but soon realized it was a metalized structure allowed to oxidize naturally. Weird, but kinda cool up close. Greenpeace has its offices in here. 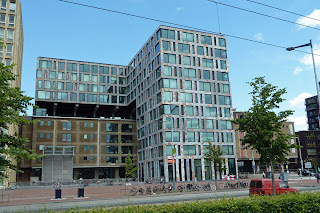 Then I started to loop back towards Centraal Station. On the way, I passed the terminal for all the cruise ships (they are damn big boats!), and next door I found a way cool music hall. There are two sections, a large hall for orchestras and a smaller hall (jutting out forward) for jazz concerts. 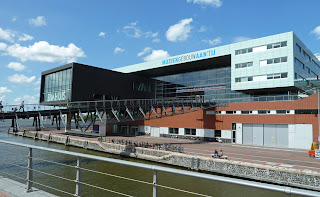 I grabbed a flyer with the summer performance lineup. Incredible! All sorts of jazz... Archie Shepp, John Scofield, some Euro groups... I really impressed the receptionist with my knowledge of Dutch jazz legend Willem Breuker Kolleckief. Also playing, a full weekend of Stockhausen. Amazing! A full weekend of Stockhausen! Where else could anyone find such a tribute... Finally, people who understand me... If only I could understand this Stockhausen score... 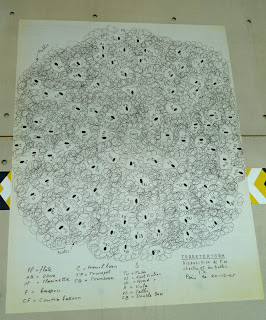 Ok, so now I've found the avant garde music capitol of the universe.... too bad I won't be around to hear any of it, but thankfully people are still presenting innovative and interesting music instead of Justin Beiber.

Across the harbor I saw these buildings... I have no idea what they are or do... but kinda cool. 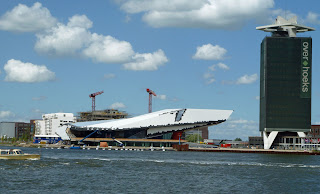 Returning to the hotel area, I thought I'd relax in one of the many infamous coffee houses. This one looked good. 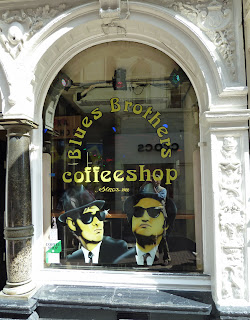 If you so desire, it's easy to leave comments on this blog (click the button). That way I know someone is reading them. Also, I can then provide more info on anything anyone finds curious. Or just smoke some more and forget about it.
Posted by Rev. Willis at 2:41 AM
Email ThisBlogThis!Share to TwitterShare to FacebookShare to Pinterest

Sherman, you have done a fantastic job! Now I know you weren't just slacking while I was working. You were a man on a mission. (And I thought you'd never go on a mission...)

This score isn't from Stockhausen. This is Xenakis' "Terretektorh"