Chet Baker Died For Your Sins 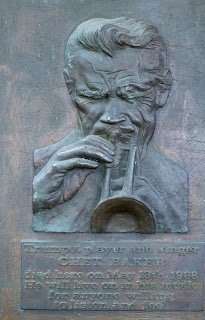 Chet Baker was a very good jazz trumpet player, rising to fame as part of the L.A. scene in the late '50s. He also did some sultry vocal work, very popular with the ladies... especially since he was an extremely good looking guy. But the drugs slowly did him in, ravaged his good looks and limited his playing ability, not to mention the pressures of the music business which can suck the soul of any sensitive musician. Somehow he managed to hang on, playing into the early '80s, mostly in Europe, until his death.

But you only have to hear his version of "My Funny Valentine" or his "Songs For Lovers" CD to know what a great and beautiful musician he could be.

Why am I writing this? Chet fell to his death from an Amsterdam hotel window (or was pushed by a dealer who was owed money... the myths and suspicions continue to today). One of my goals visiting Amsterdam was to find the hotel and the small monument to his death. 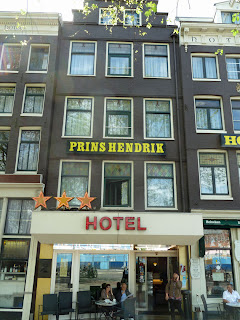 At the top of this post is a pic of the plaque from the front of the hotel... and inside is a large painting representing his life. 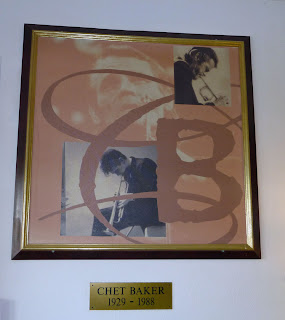 I think its wonderful of this hotel to do this tribute. Perhaps it draws customers, but I suspect most young folks now come for the dope and don't even know who Chet Baker is. Anyway, I found it all somehow quite moving. But then we dinosaurs are moving on and out... at least Chet will live forever in his recordings.
Posted by Rev. Willis at 2:23 PM
Email ThisBlogThis!Share to TwitterShare to FacebookShare to Pinterest