Miriam is still at her conference, so it's another walkabout day for me. Wonder what kind of trouble I can get into. Let's try car jacking...

Not many new Alfas in the US... I guess they are just starting to import them in the last year or so. But I've seen a number of new Alfa Romeo models in Amsterdam. And, in keeping with the general trend of very small cars (fuel mileage, parking, etc.) in European cities, I found this cute new Alfa. 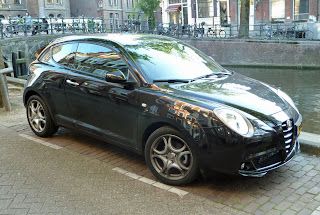 In the Dam, the real center of Amsterdam, there's this wonderful classic building. But it's been turned into a shopping mall! Well, at least they preserved the building. 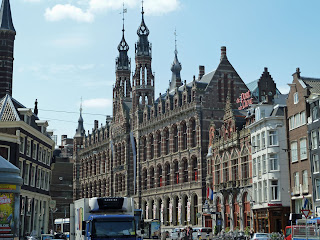 One of the shops in the mall has a very strange name. Apparently the name does not have the same connotation in Amsterdam as in the US. This store is actually part of a major chain of clothing, furniture, and housewares. 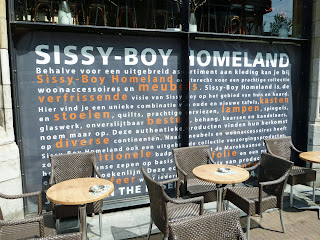 To purge my impure and politically incorrect thoughts, I stopped at this memorial on a bridge over a canal. 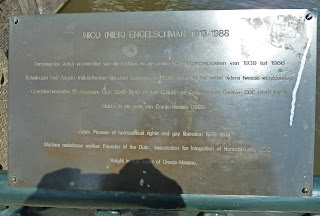 Engelschman was a major figure in the struggle for gay rights going back before World War II, then was a fighter with the resistance during the war. Following the war, he again resumed his work for gay rights.

Then I found this church steeple. One of a zillion, but I liked it. 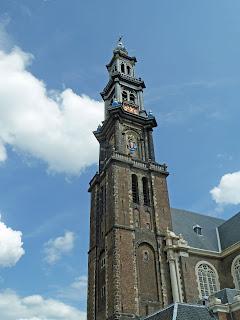 For some reason, "French" fries, frites, are really big in Amsterdam. There's lots of little shops and stands that sell orders of these potatoes. Pretty good, actually, crisp on the outside, somewhat thicker and therefore more potatoey on the inside. Ketchup is extra... but then you often have the choice of about a dozen "special" sauces... probably fitting for the many nationalities in this city. 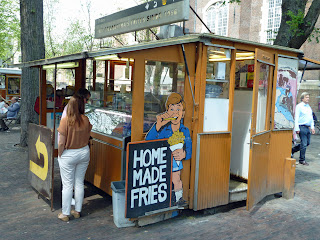 I was wandering toward an area called the Jordaan and its double vowels, since I'd read an article in the NY Times praising its neighborhood feel. Lots of small shops and cafes, and then, following my Chet Baker theme, I found this cafe. 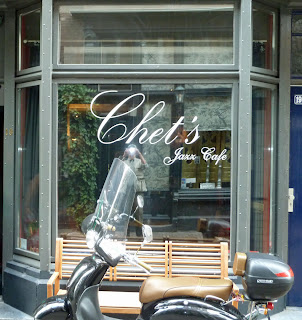 Too bad I was busy at night. I only hope they carry on the jazz tradition. 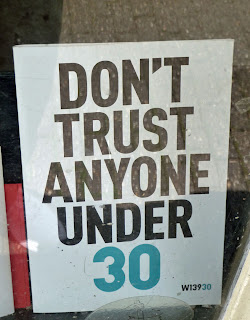 I used to feel the opposite. But as I age, I'm more sympathetic to this point of view. A discussion for another time.

And at last, a pic of the ladies in the window... 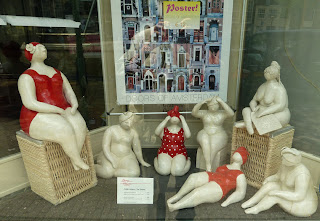 As you wander along the canals, you often run across interesting "comfort stations". Unfortunately, they are for men only (women never need to urinate, right?). This is actually a very classy pissoir. Still, an interesting dilemma between the sexes. 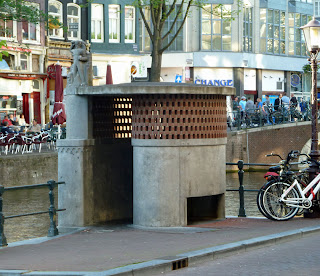 For lunch, I decided on yet another Dutch pancake. Seemingly an infinite number of variations available (I think the Dutch generally like lots of bacon mixed in), I chose bananas and rum. 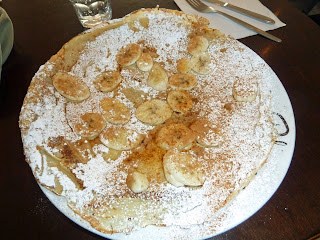 I returned to the hotel early. So I decided to be naughty and zip around the corner to a very interesting museum. 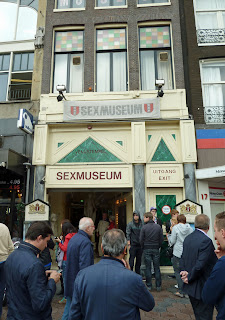 Turns out to be a very interesting and well done museum. Tittillating, certainly, but very fun. I especially enjoyed the delicate Japanese erotica, and the B&W pics from the turn of the century. Seems people have been sucking and fucking and chomping in the same ways since the beginning of human history. When it comes to sex, there's nothing much new... but then I guess there doesn't really need to be.
Posted by Rev. Willis at 12:59 AM
Email ThisBlogThis!Share to TwitterShare to FacebookShare to Pinterest